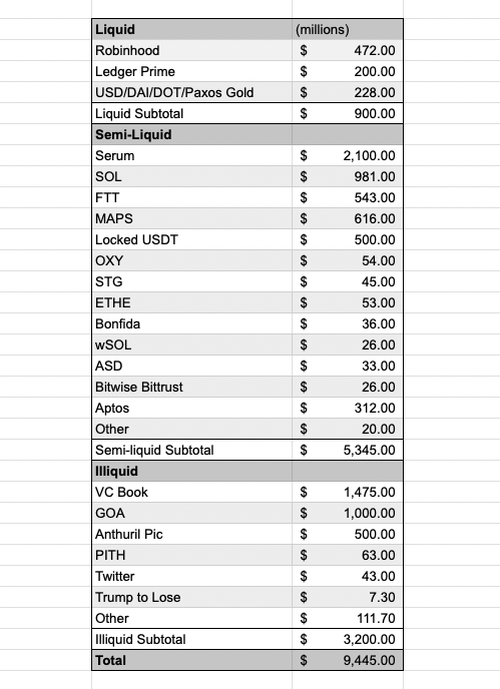 On Friday, we first learned courtesy of a mystery twitter account belonging to an anonymous FTX insider, that the now bankrupt crypto exchange held just $900 million in liquid assets (including, among other things, a $7.3 million online bet by Democrat megadonor Sam Bankman-Fried for Trump to lose).

Of the $900 million in liquid assets, the largest portion – or roughly half – was in the form of $470mn of Robinhood shares owned by a Bankman-Fried vehicle not listed in Friday’s bankruptcy filing, which included 134 corporate entities. The liquid assets represent just 10% of the total assets (including $5.4BN in semi-liquid and $3.2BN in illiquid) and is a fraction of the $9 billion in liabilities at FTX which will now make their way through bankruptcy court for the next several years.

The document, which the FT also tracked down on Saturday and discussed here, and which was shared with prospective investors before the bankruptcy, provides a detailed picture of the financial hole in the FTX crypto empire and suggests customers of FTX international may face steep losses on cash and crypto assets they held on the exchange (and speaking of the 134 subs that FTX listed on its bankruptcy filing, the FT notes that the company had incorrectly listing entities it did not own in its initial filing, while as we reported earlier, the exchange suffered an apparent hack on Friday night that drained its balances to zero).

Aside from the spreadsheet shown above, the FT also noted another spreadsheet which references the $5bn of withdrawals last Sunday – which as everyone knows by know were precipitated by CZ telling the world he would pull his money after the “recent revelations” and sparking a bank run on FTX which the exchange did not have nearly the fund to defend against; the sheet also noted a negative $8bn entry described as “hidden, poorly internally labled ‘fiat@’ account”.

It is this entry that the prosecution’s case will revolve around, because Bankman-Fried told the Financial Times the $8bn related to funds “accidentally” extended to his trading firm, Alameda (he declined to comment further). Earlier this week, he tweeted that FTX international had $4bn in easily tradable assets when it faced Sunday’s $5bn surge of withdrawals. He has since deleted many of his fraudulent twitter misrepresentations.

“There were many things I wish I could do differently than I did, but the largest are represented by these two things: the poorly labeled internal bank-related acount [sic], and the size of customer withdrawals during a run on the bank,” the spreadsheet adds.

Shifting away from assets, in its now irrelevant investment materials, FTX Trading Ltd, the company behind the main international exchange, stated $8.9 billion in liabilities, the biggest portion of which is $5.1 billion of US dollar balances.

Healthy companies typically have assets that match or exceed their liabilities. The spreadsheet says FTX Trading had a total of $9.4bn of assets, but as it itself suggests, only 10% or so could be made liquid in case of a crisis.

Indeed, the vast majority of FTX Trading’s recorded assets were re either illiquid venture capital investments or crypto tokens that are not widely traded, according to the spreadsheet, which cautions that the figures “are rough values, and could be slightly off; there is also obviously a chance of typos etc. They also change a bit over time as trades happen.”

As shown in the spreadsheet above, the company’s biggest asset as of Thursday was $2.1bn worth of a cryptocurrency called Serum. Unfortunately, the market value of Serum was only $86 million on Saturday, according to CoinMarketCap, suggesting FTX’s holdings are a fraction of what was represented if sold into the market.

And while we now know that the endgame was bankruptcy, the FT reports that according to the latest set of investment materials SBF was seeking to raise $6bn-$10bn including from a convertible preferred stock paying a 10% dividend that could later be converted into common equity in FTX international at a valuation of between $12bn-$15bn. “This is just a lower bound on the terms investors can get,” the materials add.

What about the liquid assets? Well, the FT report goes on to notes that until Friday afternoon, Bankman-Fried was looking to sell the $472MM of Robinhood shares, the largest liquid asset listed for FTX Trading, in privately negotiated deals he was arranging on the messaging app Signal, according to an FT source. As a reminder, SBF acquired a 7.6% stake in Robinhood in May, a transaction which delayed (but did not halt) the company’s collapse into oblivion. As part of the attempted firesale, Bankman-Fried was entertaining offers at a 20% discount to Robinhood’s VWAP price, or about $9 per share, said an FT source, who ultimately declined to buy due to perceived legal risks.

But what is remarkable, is that the proceeds from the HOOD stock offering would not have gone to the now bankrupt FTX estate to satisfy prepetition claims; instead the Robinhood shares were held by an Antigua and Barbuda entity called Emergent Fidelity, which is personally controlled by Bankman-Fried, according to US securities filings. Emergent Fidelity is not among the entities listed in Friday’s bankruptcy filing.

In other words, SBF – who is most certainly on the run at this moment – was hoping to fill up his personal bank account by dumping his HOOD holdings, while giving FTX creditors the finger (again).

Finally, as we also noted on Friday, the FTX spreadsheet also noted that in addition to the $900mn of “liquid” assets, $5.5bn of “less liquid” assets consisting of crypto tokens, and $3.2bn of illiquid private equity investments…

u cant make this shit up pic.twitter.com/lAdQGO2W2W

… there was also an obscure $7.3 million bet for “Trump to Lose”. Which is part for the courtse for any Democrat criminal mastermind.

The good news for the rest of the crypto space: there are no bitcoin assets listed, despite bitcoin liabilities of $1.4BN. That means the company can not dump bitcoin in the open market, and it also means that the odds of continued selling pressure are now far less than previously speculated. Which is far more than one can say for Vlad Tenev whose Robinhood stock is facing a world of pain when it reopens on Monday.

And while the above will surely be Exhibit A for the prosecution, Exhibit B will be a video meeting in which Alameda Research’s chief executive and senior FTX officials confirm they knew that FTX had lent its customers’ money to Alameda to help it meet its liabilities.

Citing ‘people familiar with the video’, the WSJ reports that Alameda employees held a video conference late Wednesday Hong Kong time, in which 27-year-old Alameda CEO Caroline Ellison (also known as @carolinecapital) said that she, Bankman-Fried and two other FTX executives, Nishad Singh and Gary Wang, were aware of the decision to send customer funds to Alameda,

Singh was FTX’s director of engineering and a former Facebook employee. Wang, who previously worked at Google, was the chief technology officer of FTX and co-founded the exchange with Mr. Bankman-Fried.

Ellison said on the call that FTX used customer money to help Alameda meet its liabilities, the people said, assuring the 27-year-old teenager-lookalike of a lengthy prison sentence. 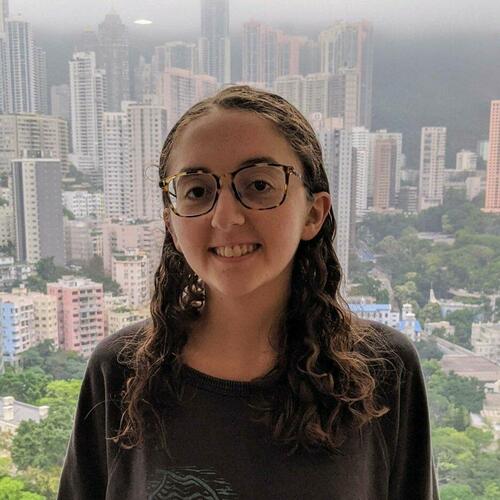 Hilariously, after tweeting out all the incriminating evidence the prosecution will need to slamdunk this case, neither SBF nor Caroline Ellison returned WSJ phone message and an email seeking comment. Singh and Wang didn’t respond to multiple messages seeking comment. Ryne Miller, FTX US’s chief legal officer, declined to comment.

Of course, by it’s not like they have anything to say that we don’t already know. Well, we take that back. Considering that FTX was instrumental in laundering bitcoin into Ukraine….

will be very interesting to go through all of these fund flows as part of discovery. https://t.co/ZbxJvjmwga

… we do wonder just how much crypto money-laundering between the US and Ukraine will emerge as a result of the bankruptcy discovery, and how long until we can safely claim that “Sam Bankman didn’t fry himself”?