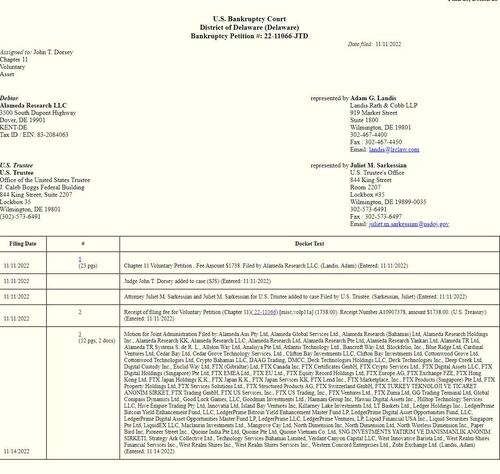 We have been waiting for the FTX bankruptcy docket to add anything more than merely procedural filings (or any filings for that matter), and certainly the so-called First Day filings which should lay out what really happened at the now bankrupt exchange-cum-hedge fund, but the only thing we have gotten so far is this: just two entries in the docket for a case which the entire world is closely following.

And while the criminal mastermind behind FTX, Bankman-Fried, should at least be doing everything he can to explain where the billion in client funds vaporized to, as he promised…

11) I'll get to what happened. But for now, let's talk about where we are today.

… at least until such time as he is finally arrested (which Elon Musk said will never happen because he is such a prominent Democratic donor), he appears to have little desire to do the right thing, and instead has been trying to salvage an unfixable situation and according to the WSJ, the 2nd largest democrat donor still thinks that he can raise enough money to make users whole.

Bankman-Fried, alongside a few remaining employees, spent the past weekend calling around in search of commitments from investors to plug a shortfall of up to $8 billion in the hopes of repaying FTX’s customers, the WSJ sources said. It wasn’t clear if any proceeds from such fundraising would go into his personal bank account, nor was it clear if he was merely calling other fugitive criminals such as Jho Low who made billions by robbing Malaysia blind with the help of Goldman Sachs, or is simply hoping to find even bigger idiots than his current roster of “erudite” investors.

The WSJ goes on to redundantly notes that the “efforts to cover that shortfall have so far been unsuccessful.” The paper also couldn’t determine what SBF is offering in return for any potential cash infusion, or whether any investors have committed. To be sure, the last thing on SBF’s mind is to transfer some of his well-hidden offshore funds to make those customers who trusted him whole.

Before the chapter 11 filing, Bankman-Fried had spoken to companies including rival crypto exchanges Coinbase and Kraken, plus hedge funds and venture capital investors in the hope of a bailout, according to people familiar with those talks. His largest rival, Binance, agreed briefly to buy FTX, before backing out.

The amount needed to make FTX solvent would likely be multiples of the $1.9 billion the company raised during its existence. FTX’s most recent funding round was in January, when it raised $400 million from a long list of Silicon Valley and Wall Street names, including Tiger Global and SoftBank Group Corp.

In separate news, FTX’s bankruptcy lawyers said the case could involve more than one million creditors: that means there will be a lot of angry people when the Democrat-controlled DOJ announces it has no plans to press charges against one of the most generous (and criminal of course) Democrat donors in history. Because the last thing anyone wants is to tie the money laundering loose ends between Democrats, Ukraine and crypto fund flows over the past year.