GOP One Seat Away From House Control: Bidens, Fauci, FDA Brace For Investigations 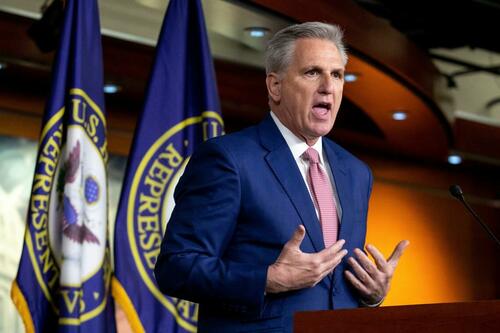 While Democrats are assured of extending their control of the U.S. Senate for two more years, on Monday the Republican Party moved within just one seat of flipping control of the House of Representatives — which has big implications for a variety of investigations .

It takes 218 seats to control the chamber. With key victories in California, Arizona and New York, Republicans have now secured 217, according to the Associated Press, compared to 205 for the Democrats. There are 13 races still uncalled, and Republicans are currently leading four of them.

So far, Republicans have posted an 11-seat pickup from the current legislative session, well short of expectations. After hopes of routing the Democrats, Republicans may wind up with the slimmest majority of the 21st century. In 2001, Republicans had a 221-212 edge.

That slim majority promises to make current House Minority Leader Kevin McCarthy’s quest for the House speakership interesting. On Tuesday, the House Republican conference will take a vote to select the party’s nominee for the speakership. For that, McCarthy only needs a simple majority.

In January, however, the vote goes to the full House of Representatives. Assuming no Democrat votes for McCarthy, that means he’ll need nearly every Republican’s vote to become speaker.

So far, one representative has announced his intention to challenge McCarthy. Late on Monday, Arizona’s Andy Biggs threw his name in the hat. Appearing on Newsmax, Biggs, a former chairman of the House Freedom Caucus, said:

“We have a new paradigm here, and I think the country wants a different direction from the House of Representatives. And it’s a new world, and, yes, I’m going to be nominated tomorrow to — to the position of Speaker of the House.”

If nothing else, Biggs challenge may help the Freedom Caucus and its 30-some members extract concessions from McCarthy on how the House would be run in the next session. Among their demands: Broader membership in the group that doles out committee assignments, allowing committee members to choose their own chairs, allowing amendments from the floor, and being given five days to review legislation before voting.

Perhaps the most tantalizing aspect of the Republicans’ pending control of the House is the various investigations that are sure to commence as Democrats relinquish chairmanship of every committee. Subjects of those investigations are likely to include:

Anticipating a GOP takeover, Republican representatives and their staffs have already been laying the groundwork for those investigations, says Rep. James Comer, who’s expected to chair the House Committee on Oversight and Reform:

House Republicans will use the resources of the Oversight Committee to investigate the Administration’s self-inflicted crises, identify issues, & propose reforms to prevent abuses from being repeated.@GOPoversight is ready to hit the ground running. @SteveHiltonx @NextRevFNC pic.twitter.com/3KEIkvqeKG

With Democrats having set a precedent of referring subpoena-refusers for criminal prosecution, things should be entertaining…

Megyn Kelly joins the chorus of MAGA calling for Fauci to be hauled before committees if they take the House: “F*ck you, Dr. Fauci! You get a congressional subpoena, you’ll show up or you’ll get the Steve Bannon treatment.” pic.twitter.com/unXllbUMVw