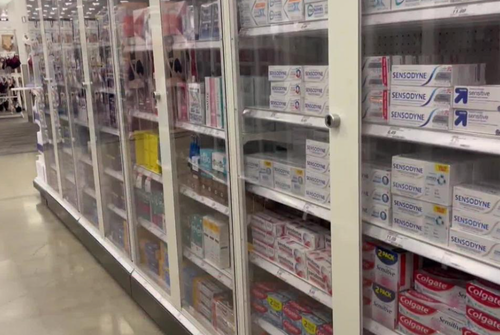 Target is battling what’s being called an organized retail crime wave, resulting in a massive hit on profits this year. The company has employed theft-deterrent merchandising strategies, but still, that’s not enough to stop criminals from running off with everything on the shelves.

Earlier today, the company reported dismal earnings, slashed guidance, and warned consumers are pulling back on spending amid the worst inflationary environment in decades. The retailer also revealed gross profit margins were reduced by $400 million so far this year due to shrink, the industry term for theft and other product loss.

“There’s a handful of things that can drive shrink in our business and theft is certainly a key driver.

“We know we’re not alone across retail in seeing a trend that I think has gotten increasingly worse over the last 12 to 18 months.

“So we’re taking the right actions in our stores to help curb that trend where we can, but that becomes an increasing headwind on our business and we know the business of other,” Target CFO Michael Fiddelke said.

Yahoo Finance spoke with the Target spokesperson, who said the problem is primarily due to “organized retail crime.”

Shoplifting is a behavior not just in response to backfiring social justice reforms but also has its roots deep in poverty as high inflation crushes millions of Americans into poverty. Wage growth has been negative for 19 consecutive months, while food, energy, and shelter prices remain elevated. Working poor have drained personal savings and racked up insurmountable credit card debt to buy essential items, while some folks have resorted to stealing to survive.

Target blamed most of the thefts on organized crime gangs.

The thefts are so bad at the Target in Minneapolis downtown that everyday toiletries are locked behind shatterproof glass cabinets.

Target and many other retailers have demanded Congress do something. The US Chamber of Commerce has called the looting of retail stores a “national crisis.”