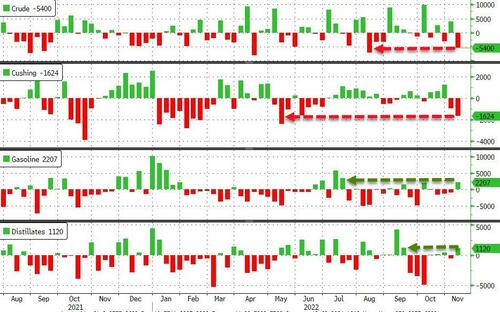 Despite a surprisingly large crude draw, oil prices are lower this morning as a pipeline carrying Russian oil to Europe was reported to have restarted after being offline during a turbulent 24 hours.

Prices dropped as a section of the Druzhba oil pipeline, Europe’s largest crude oil conduit, was reported to have restarted after a disruption to its power supply.

Oil has experienced a renewed bout of volatility amidst a renewed injection of geopolitical risk. An oil tanker linked to an Israeli billionaire was hit by a projectile about 150 miles (241 kilometers) off the coast of Oman, according to a statement from its owner. Yesterday, a rocket hit a Polish village near the Ukrainian border. The incident was unlikely to have been an intentional attack, the Polish president said.

With “crude oil at the epicentre of Eastern European risk oil,” traders had little choice but to “graduate what-if scenarios hedging the potential risk to global oil supplies” if a smouldering powder keg ignites, he said.

Additionally, prices fell as China’s COVID-19 cases continue to rise, suggesting more lockdowns ahead of the holiday and flu season 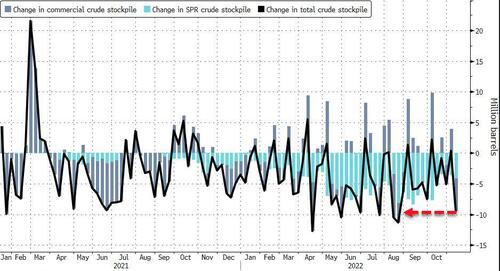 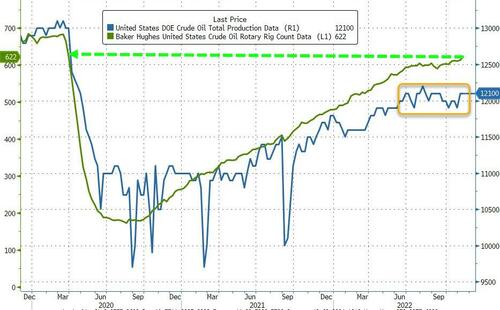 WTI was hovering around $85 ahead of the print, rallied at first but is now sliding, perhaps on the weakness in the product side… 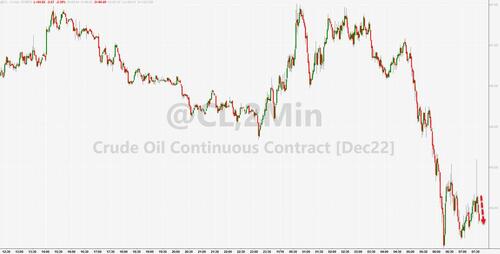 The imminent end of US Strategic Petroleum Reserve releases may also be a boost, as commercial inventories could be drained to overcome the lack of supply from government tanks.

Finally, we note that Refinery utilization rates rose for the third consecutive week as more facilities return from maintenance. Utilization rates nationwide reached 92.9%, the highest since 2004 on a seasonal basis.