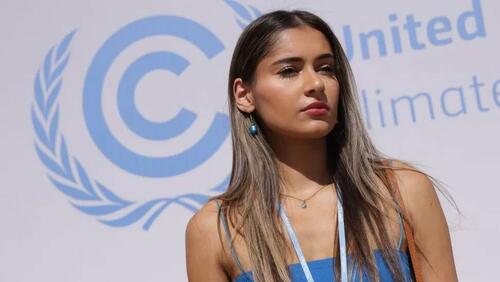 If you said one week ago that the COP27 virtue signaling boondoggle in Egypt’s Sharm el-Sheikh would be an epic failure, pat yourself on the back: it was. As Argus media reports, a draft of the COP 27 UN climate summit cover decision released today reiterates many of the Glasgow Climate Pact goals agreed at Cop 26 last year, and, as expected, does not mention a broader fossil fuel phase down.

The document repeats a request made at COP26 for all countries to revisit and strengthen their 2030 nationally determined contributions (NDCs) — countries’ climate pledges — to align with the UN’s 2015 Paris Agreement, and to update their long term strategies. The Paris Agreement aims to limit global warming to well below 2°C above pre-industrial levels, and ideally to 1.5°C. Only problem: there is no mandate on how to do it, especially since even Europe is backsliding on its anti-fossil fuel promises and has restarted coal plants (not to mention record coal output in China).

Only around 25 countries updated their NDCs before COP27, and a few more did so during the summit, but it is still not enough to meet the 1.5°C target. The document says the emission gap between pledges and what is needed to hit the Paris Agreement target represent “a grave concern”.

The document reiterates the “urgency of action to keep 1.5°C in reach”, but during informal consultations at the start of this week parties were unable to reach agreement on inclusion of stronger language to limit global warming to 1.5°C. This would be more ambitious than the Paris Agreement.

It’s been 27 COPs and we still have no declaration to phase out fossil fuels.

Fossil fuel lobbying is a powerful force but the science is clear. We cannot keep expanding oil & gas!

And while the G20 summit of major economies, which also concluded this week, strengthened commitments, saying the group “resolves to pursue efforts to limit the temperature increase to 1.5°C”, which could be viewed as an encouraging sign, the COP27 text still makes no reference or pledge to a fossil fuel phase down, language pushed by India at the start of the summit and that has gained support, although the EU stressed it should not distract from efforts on phasing down coal power generation, as agreed at Cop 26.

The energy and cost of living crises have put efforts to phase out fossil fuel subsidies at risk. Subsidies are likely to increase this year, partly because of higher energy prices arising from Russia’s war in Ukraine. The commitment in the draft Cop 27 text still does not set a deadline for a phase-out of inefficient subsidies. So far only G7 countries have one, for 2025.

Pan-African Parliament president Fortune Charumbira said today that the issue of fossil fuels cannot come “before other major commitments are delivered”. Fossil fuels will remain a reality in terms of use until “we have financed the alternatives”, he said.

On loss and damage, the document does not mention the creation of a new facility, but it welcomes the inclusion on the Cop 27 agenda of discussions on a new funding arrangement. Loss and damage refers to the destructive effects of global warming, and is a priority for many vulnerable countries experiencing extreme climate-related events such as storms and rising sea levels.

The draft decision “expresses deep concern towards the significant financial costs associated with the loss and damage for developing countries” and “reiterates the urgency of scaling up action and support”. Many countries and observers said Cop will be a failure if parties fail to agree on the creation of a loss and damage fund this year, and progress on the issue could be critical to move forward with other negotiations.

Perhaps the only good thing to come out of the COP27 is that while everyone’s favorite attention who… er, seeking woman, Greta Tunberg, boycotted it because it did not place her on a pedestal and accused the summit of being an exercise in Greenwashing (for once she actually is right), the summit which took place in Egypt unveiled to the world the new and improved Greta 2.0: meet Sophia Kianni, 20-years-old, who is an advisor to the UN Secretary General on Climate.

Before and after climate change. Gotta dress down… and maybe a face switch…? pic.twitter.com/pa2CX36kk6