Trader Bets Millions On A Massive Pivot By The Fed, Expects 2% Rate By Mid-2023

On Thursday, St. Louis Fed President James Bullard sparked a slide in risk assets after he said policy makers should raise interest rates to at least 5% to 5.25% to curb the highest inflation in nearly 40 years. Meanwhile, as Bloomberg’s Vincent Cignarella writes this morning, crude futures point to a recession, lower inflation expectations and a Fed soon to be on hold.

With winter approaching one would expect energy prices to be rising but that is not the case. Across the complex they are falling, even gasoline futures, and that is with the holiday driving season approaching.

As Cignarella observes, the reasons seem all too clear: dropping demand for energy leads consumer inflation expectations. Despite the Fed’s warnings, consumers believe inflation is slowing. For risk markets that should mean a healthy environment for bond bulls and dollar bears. For equities, it’s a bit muddy. Lower rates generally mean higher stocks but slower spending will mean lower earnings so choose your sectors wisely; not all will gain as rates fall.

And in keeping with the coming recession, the market is starting to notice, and as Bloomberg’s Edward Bollingbroke points out, a standout trade over the US morning session has been a stream of buying in SOFR September 2023 options, an upside play targeting a drastic Fed pivot to a 2% rate by September next year vs. the approximately 4.9% currently priced into the swaps market. 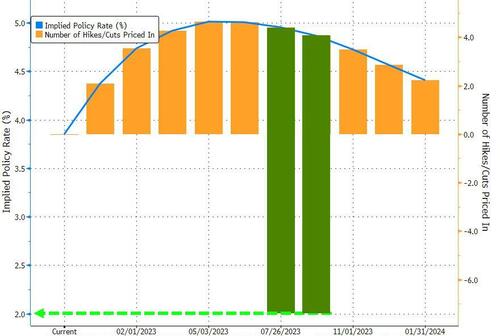 The premium paid was approximately $4.5 million, and targets a policy rate around 2% by options expiry; for context, the Fed-dated OIS currently prices in a policy rate of around 4.9% for the September meeting next year, almost 300bp above options target. 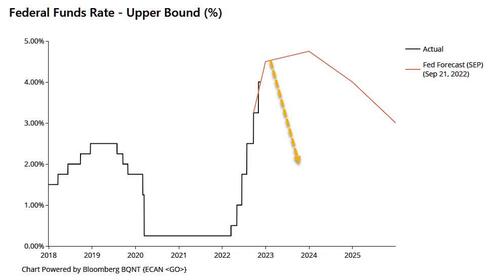 In other words, someone is not only betting on a pivot, but a huge pivot.

Considering that the overwhelmingly consensus trade now is that the Fed won’t be cutting any time in 2023 – just like it was anathema to even suggest a rate hike in 2022 one year ago – we have a feeling that this will be an extremely profitable trade less than a year from today.