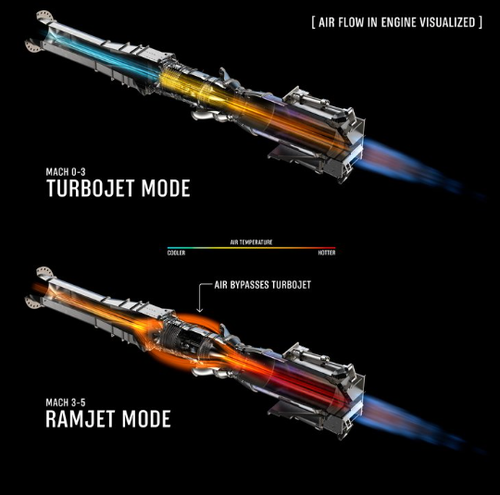 Remember the scene in the movie Top Gun: Maverick, Captain Pete “Maverick” Mitchell is piloting the SR-72 “Darkstar” hypersonic plane and slams the thrust lever for the engines all the way forward. The engines ignite in a fiery blast that propels Maverick to Mach 10.

The propulsion system centered around the SR-72 Darkstar (a plane that is only a concept) is a turbine-based combined cycle, which merges a turbine engine with a ramjet.

While there is no aircraft in the production stage with this insane propulsion system, ground-testing testing is underway.

Hypersonic airplane developer Hermeus Corporation tweeted a video on Thursday of one of these engines transitioning from “turbojet” mode to “ramjet” insane mode.

Hermeus believes the engine will propel an aircraft in turbojet mode to March 3. They said the transition to ramjet would push the aircraft to March 5.

“This is one of the most important technological feats to making operational hypersonic flight a reality. Most hypersonic platforms use rockets – our approach allows us to use existing infrastructure at traditional airports,” the company said.

This is one of the most important technological feats to making operational hypersonic flight a reality.

Most hypersonic platforms use rockets – our approach allows us to use existing infrastructure at traditional airports. pic.twitter.com/FTq6DZmXxI

Here’s more of how the engine transitions:

At low speeds Chimera is in turbojet mode – just like any jet aircraft. But as the temperature and the speed of the incoming air increase, turbojets hit their performance limit. This happens at around Mach 2.

Chimera has a pre-cooler that reduces the temperature of the air coming into the turbojet. This allows Hermeus to squeeze out a bit more performance from the turbojet before transitioning to ramjet.

The company said they “will begin flight testing in late 2023.”

While Darkstar speeds are not yet attainable, supersonic passenger aircraft will be available at the end of this decade, and hypersonic travel could be a mid/late 2030 story.