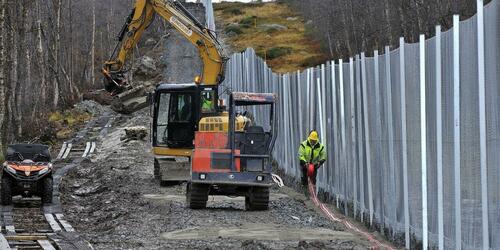 Finland has announced it will “build the wall” – along its lengthy border with Russia as relations between the two continue rapidly deteriorating due to the Ukraine war and Finland’s bid to join NATO.

The plan, unveiled Friday, is a 200-kilometer ‘high security’ fence along its border with Russia, which in total is 1,300km in distance. This comes amid fears that Moscow could use migrants to exert pressure on Finland, concerns that grew after President Putin’s ‘partial mobilization’ order was issued in September.

At that time Finland reported surges of border crossing traffic as young men attempted to flee potential conscription to fight in the war in Ukraine. Since then, there have been widespread reports that many have returned, given the Kremlin declared the end of the mobilization period.

According to the AFP, “The fence will be over three meters tall with barbed wire at the top, with particularly sensitive areas being equipped with night vision cameras, lights, and loudspeakers, project manager Ismo Kurki explained during a press conference.”

Finland shares the longest stretch of border with Russia among any EU member.

“We were in agreement about the need,” Marin said after the meeting. “Now the government will bring concrete proposals to parliament.” Funding for the pilot section would be voted on by the start of next month, she said.

“It is a question of securing proper surveillance of Finland’s border,” Marin said. “We want to ensure our border guard has sufficient support to carry out appropriate and effective border control, and we need to be prepared for any disruptive situations.”

Below: the initial proposed distance considered and debated in October…

The main political parties of Finland jointly agreed today to build a border fence with Russia.

Initially, a trial stretch will be built and the entire fence should be completed within 4-5 years. pic.twitter.com/MDyMpy5j0c

The projected price for the 200km long stretch of fence is nearly $400 million, and is to be completed in three phases. Per the APF, “First, a pilot fence three kilometers long will be built at the Imatra border crossing in March 2023.” And following this, “Based on that experience, the second phase will see the construction of a further 70 kilometers of fence in areas near border crossings, starting in late 2023.” The final phase is expected to be complete by 2026 if the prior phases go as planned.

Russia previously warned its Arctic neighbor against militarizing the border in relation to the controversial NATO bid. The Kremlin further stated that NATO positioning military assets and weaponry there risked setting off a nuclear arms build-up in the Baltic region.