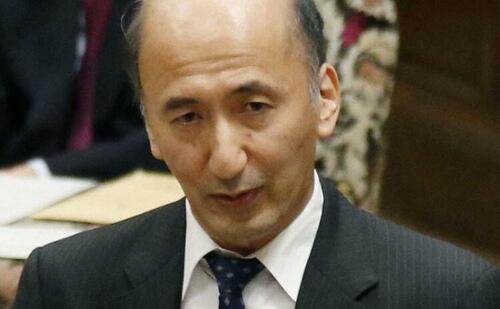 Central banks must remove emergency support measures once financial crises are over to avoid causing moral hazard in the market, former Bank of Japan deputy governor Hiroshi Nakaso said on Thursday. Which is ironic coming from the one central bank that not only institutionalized moral hazard and MMT, keeping rates at or below zero for the past 30 years, but also ushered in QE and now owns more than half of the entire JGB market, and even the merest hint of a pull back in BOJ support would spark financial armageddon for Japan where the country’s pensions would be wiped out in a millisecond should a central bank backstop ever be removed.

According to Reuters, Nakaso, who is considered one of the top candidates to become next BOJ governor, also said that once an economy was running below potential capacity, a central bank could more easily normalize ultra-loose monetary policy. Which is easy for him to say now that he is in the running for next BOJ head: we just somehow doubt he will demonstrate the same conviction if and when he becomes the next BOJ head.

Echoing what we have said for the past 13 years, Nakaso said that investors had come to (correctly) assume that central banks would always come to the rescue when financial markets destabilized because of the massive monetary support deployed during the COVID-19 crisis, Nakaso said.

“This moral hazard must be removed once the crisis is over, though this is easier said than done because it’s a contradictory issue,” Nakaso said in a seminar hosted by the University of Tokyo and International Monetary Fund. And yet he said it, because the wave against relentless central bank intervention – which sparked record inflation across the world in the aftermath of the Covid crisis – is turning. Then again, it will promptly make another U-turn the moment tens of millions are left without a job as the financial tightening spawned by central banks in the past year finally hits the economy instead of just markets.

“Crisis management is like creating … artificial moral hazard,” he said. “It shouldn’t stay forever.” Yes it shouldn’t, which is precisely what we said in 2009, and yet no official or politician will ever have the guts to pull the plug knowing very well that the alternative is overnight collapse of the financial system.

None of this fazed Nakaso who continued citing what monetary policy should look like, not what it looks like now: to avoid moral hazard, central banks could design their lending facilities so they were less costly to tap for investors in crisis situations but became more costly when the market normalised. Oh you mean like ending QE 2, 3, Twist and so on, instead of holding on to them for years and for dear life. Yes, well, we tried suggesting that pretty much every single year since 2009 and it didn’t work. It won’t work now either, and it’s why – as Elliott correct predicted – we are facing tens of trillions more in monetary stimulus as the alternative is total collapse.

“Maybe this is something we can revisit and study” in preparing tools to combat the potential next financial crisis, Nakaso said. Maybe. Or maybe not, because once it is up to Nakaso to pull the plug on Japan’s unprecedented easing and collapse what’s left of Japan’s economy and market – as it is now far too late to try and “normalize” – he will never dare to do it.

Nakaso’s remarks come amid growing debate about how and when the next BOJ governor will reduce its massive stimulus, considered by some to be distorting market pricing.

“Inflation pressure that proved persistent … can be attributed at least … to generous monetary and fiscal support by the authorities,” Nakaso said, debunking relentless lies by central bankers in Europe and the US who have feigned ignorance and claimed none of the galloping inflation observed today is the result of their actions.

Nakaso was speaking at the online symposium from Bangkok, where he was joining a meeting of national economic leaders along with Kishida. Their being there together may stoke speculation about Nakaso’s closeness to the premier.

Of course, all of this is just posturing and jawboning: as analysts quoted by Reuters note, neither would rush into tightening monetary policy, given the fragility of Japan’s economy and the need to keep low the cost of funding its huge public debt. And if they don’t tighten now, they never will.

Still, compared with Amamiya, Nakaso is seen more in favor of dialing back Kuroda’s radical stimulus. In a book published this year, he laid out in detail how the BOJ could end ultra-loose policy. What he left out is how JGBs go bidless, how trillions in Japanese pensions evaporate overnight, and how a global financial shockwave crushes the western financial system which is inextricably linked to the continued stability of the Japanese bond market.