Chaos Theory: How Tankers Thrive Amid Energy Crisis And War 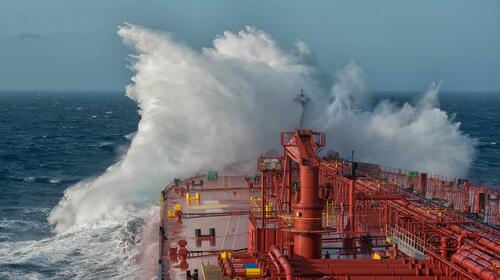 By Greg Miller of FreightWaves

Global crises and geopolitical chaos are bad for most businesses. Not so in industries like defense and energy shipping. Go to a commodity shipping conference in troubled times and you’ll hear a lot about how bullish all that trouble is for freight rates.

The focus at Marine Money’s New York Ship Finance Forum on Thursday was on the worsening global energy crunch, the war in Ukraine, looming sanctions on Russia, the evolving situation in China — and how phenomenal the rate outlook is for tankers carrying crude, refined petroleum products and liquefied natural gas.

‘The party hasn’t even started yet’

The sweet spot for rates is when disruptions are severe enough for inelastic vessel capacity to fall behind demand, but not so severe that demand is destroyed and the global economy melts down. Bad news is good news, until it gets too bad.

According to Scorpio Tankers President Robert Bugbee, “The party hasn’t even started yet. The host may be drinking a couple of drinks but nobody has come yet. They are at the pub, waiting to go to the party later. The stress hasn’t even begun to be put on the product-tanker market.”

“What we are worried about and I’m sure some of the other people here are worried about is that this gets too good,” said Bugbee. “This could get crazy. We cannot do the mathematics now to get required [future] demand for products to match the ships able to transport it.”

On the geopolitical front, the Russia-Ukraine war has been a boon for tankers. One moderator asked a tanker panel: “Do you have any concerns on the horizon — maybe [Russian President Vladimir] Putin concedes?”

But geopolitical chaos, like the energy crunch, is only good for rates if it doesn’t go too far. LNG shipping panelists warned of dire consequences in the event of a China-U.S. war.

“If that happens we’re all screwed,” said Oystein Kalleklev, CEO of Flex LNG (NYSE: FLNG). “It’s almost not even worth worrying about because the consequences are so big. Russia and Ukraine would look like a small bump in the road compared to what would happen. You would have an energy shock like you’d never seen before. The whole world economy would stop. It would be like the Great Depression.”

The more that different parts of the world fall short of energy, the higher the demand for shipping to balance out supply. That’s good for tanker owners — until the supply of energy maxes out and consumer and industrial demand is destroyed by high prices.

“We now have the worst energy crisis since 1979-1980,” said Francisco Blanch, head of global commodities at Bank of America Securities.

“Back then, we had a global oil crisis. Today, we have a crisis in gas and power markets. For the most part, it’s local prices; as people like to say in financial lingo, it’s a ‘glocal’ crisis. It hit China a year and a half ago and Europe a year ago. And unfortunately, I think it is heading straight to the U.S. Northeast.”

Utilities in New England depend on LNG. Import prices have skyrocketed due to war-driven demand in Europe. Furthermore, many New Englanders use heating oil. “Northeast inventories of heating oil are the lowest ever coming into this winter,” said Blanch. “All they can do now is first, pay, and second, pray for warm weather.”

Globally, he said, government strategic oil stocks are the lowest ever and commercial storage is also low. Spare oil production is limited. “When you don’t have inventories and you don’t have spare capacity, any incremental upward demand swing has to be met simply by higher prices and lower demand. You have to restrict demand,” he said.

Countries are bidding against each other for supplies of LNG and petroleum products. The losing bidders fall short of energy. The shipowner transporting cargo wins either way, providing a vital service for end consumers (and for cargo shippers, who profit even after paying often exorbitant freight).

Gordon Shearer, senior adviser of project development at Poten & Partners, said, “India, Pakistan and Bangladesh made big bets that they could buy LNG at spot prices, and they’ve taken the brunt of this swing in price driven by Europe. We’ve seen demand destruction and blackouts in Pakistan and Bangladesh and cargoes being diverted away from India.”

Competition for LNG supplies will heat up even further next year. According to Jason Feer, global head of business intelligence at Poten & Partners, Europe was able to fill its inventories this winter “because they had piped gas from Russia for four to five months” in addition to LNG imports. Plus, they didn’t face as much competition from China, where imports dropped 20%.

“The issue for Europe is going to be next year,” said Feer.

Europe won’t get Russian pipeline gas in 2023 and Chinese LNG buying will likely rebound. Blanch also noted that there is significantly more regasification (LNG import) capacity coming into service next year compared to liquefaction (LNG export) capacity. “So, we will have more mouths to feed but we don’t really have the amount of liquid gas to feed those mouths,” he said. “That will create more arbitrage opportunities and longer travel distances, and therefore very firm LNG [shipping] rates.”

The scramble for diesel

The same competition for resources is playing out in diesel markets and refined product markets in general.

“The big question is: Do we have the refined products to meet the [post-pandemic] reopening of the global economy? I think the answer is no, because we have severely underinvested in refineries,” said Blanch.

According to Arthur Richier, head of strategic partnerships at Vortexa, “The world needs diesel and we’re in very short supply of diesel. Europe is taking a lot of that diesel away from other economies, especially from Latin America. Europe has the cash to outbid buyers in Latin America.”

The scramble for diesel is leading to fallout in other refined products markets, as well.

“Because diesel markets are tremendously tight, refineries have adjusted their yields to do a lot less naphtha and gasoline,” said Richier. “Some of those trades, such as the gasoline trades in the Atlantic Basin and the naphtha trades heading east [to Asia], have suffered.”

The energy crisis caused by underinvestment has been exacerbated by the war. The conflict has already had a major effect on crude, products and LNG shipping markets, boosting rates.

It’s about to have an even bigger effect as sanctions create a whole new level of chaos. Starting Dec. 5, the EU will no longer import seaborne Russian crude. U.K. and EU shipping insurance will no longer be available for any Russian crude exports unless the oil is priced below the G-7 and EU price caps. The same restrictions will apply to Russian products starting Feb. 5.

Replacement EU imports will travel much longer distances, increasing tanker demand measured in ton-miles (volumes multiplied by distance). The question is how much upside will be offset by downside from lower Russian export volumes.

“We’re going to lose about a million barrels of crude oil and petroleum products [per day] as those sanctions come down,” predicted Blanch. “Why someone picked those [sanctions] dates in the middle of winter I have no idea. I’m not sure the politicians understood what they were doing.”

Richier estimated that 2 million barrels per day “will be taken out of the market next year from Russia for both logistical and sanctions reasons.”

Russia will be able to move a portion of its crude aboard “shadow tankers,” vessels insured via non-Western insurers that do not do business in U.S. dollars. But availability of shadow product tankers to carry Russian diesel will be far more limited.

“With clean [products] exports, it’s a very, very different story,” warned Richier. “Whether the oil price cap is agreed to or not, Russia will face a physical logistics issue to move those cargoes. There simply aren’t going to be enough vessels to transport those Russian barrels.”