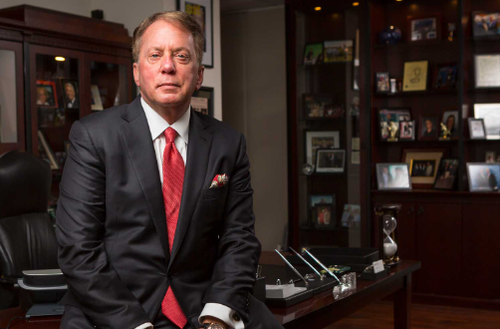 CME Chairman and Chief Executive Officer Terry Duffy has been the talk of social media today, after a podcast appearance with CNBC’s Guy Adami and Dan Nathan began making its rounds on Monday morning.

Among other topics discussed on the podcast was Duffy recalling his first meeting with Sam Bankman-Fried, which took place in March 2022.

Ole’ Terry’s senses from days of being in the pit are still sharp as can be. He pegged FTX for a fraud before the company blew up – and told Bankman-Fried as much to his face, as he called on the podcast.

Duffy says he was approached by SBF at a conference who told him he wanted to compete with CME in crypto. Instead, Duffy says he offered to give SBF his crypto franchises in exchange for working together. “Let me be your risk manager. I’ll clear it so that I know it’s done properly,” Duffy says he told SBF.

When SBF asked if Duffy would deploy his model, Duffy told him “Your model is crap. Why would I deploy a model that introduces risk into the system? Of course I’m not going to deploy your model!”

"You're a fraud. You're an absolute fraud." – @CMEGroup CEO Terry Duffy recalls his encounter with Sam Bankman-Fried last March.

From there, SBF “flat out turned me down”, Duffy said.

“Right away I said to him ‘You’re a fraud. you’re an absolute fraud’,” Duffy recants telling SBF. “You’re supposedly worth $26 billion and are altruistic? How come there’s not a $10 billion donation going to someone right this moment in time?”

And the recollection of events gels with media at the time. Later on in the spring, Duffy took to Congress and specifically made claims that “FTX [had] set aside insufficient financial resources to back its proposed direct clearing model for crypto derivatives”.

“I got berated” at Congress when blowing the whistle on FTX, Duffy says.

You can watch the whole congressional hearing below, but we’ve cued it up to a heated exchange with Congressman Ro Khanna (pointed out by @ardalyonovich on Twitter) who vehemently defends FTX after Duffy claimed that FTX had “zero capital requirements for participants”.

“I think that’s, on its face, a false statement,” Khanna barks at Duffy.

Penn professor and forensic accounting expert Francine McKenna summed it up perfectly when she commented on Twitter: “Duffy went to Congress and told them FTX was a bankrupt business model and he was ignored just like he was ignored when he said Corzine knew he had used customer funds and knew where the missing $1.6 bullion was.