The pandemic rise in excess savings was probably the most rapid increase in wealth ever seen. A combination of a collapse in demand and huge government transfers led to an estimated peak of $2.3 trillion in excess savings being accumulated by the middle of 2021.

But after the feast comes the famine, and excess savings are being run down swiftly as inflation causes prices and interest rates to rise. These excess savings act as a buffer to a recession as they dampen the feedback loop of a decline in spending, leading to a fall in income, which means less spending, and so on.

The dissaving can be seen in the rapid decline in “excess disposable income,” i.e. disposable income above its pre-pandemic trend. It is back to flat based on a 30-year trend line, signifying that excess savings are no longer being bolstered by excess income because people are spending more and pandemic-related transfer payments from the government have ceased. 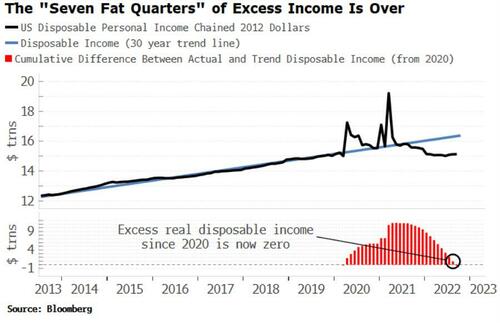 Savings are being increasingly stressed by rising debt repayments. Interest rates are rising on consumer and mortgage debt. Debt-service ratios (debt repayments as a percentage of disposable income) remain relatively low, but are rising, and could do so fairly rapidly as debt is re-fixed at higher rates.

In nominal terms, households have to repay an estimated $1.75 trillion each year, or almost 10% of disposable income. Further, this burden will get worse as more income is eaten up by rising prices. The Fed estimates that excess savings have dwindled to $1.7 trillion (as of mid-2022), a 26% drop in a year (see chart below). The stock of excess savings is likely to fall with an increasing pace as the lagged effects of rising interest rates bite. 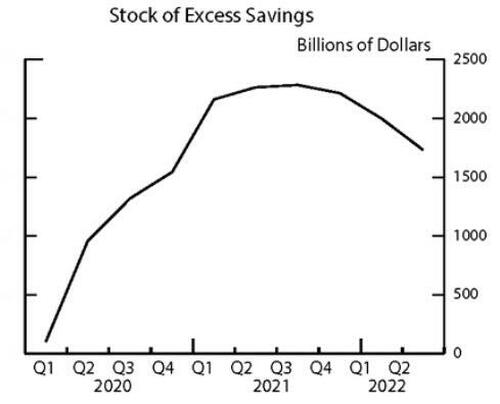 The recession buffer is being wiped out, leaving the US economy in a more fragile position and raising the likelihood the Fed has reached its peak in bellicosity on the war on inflation (for now).