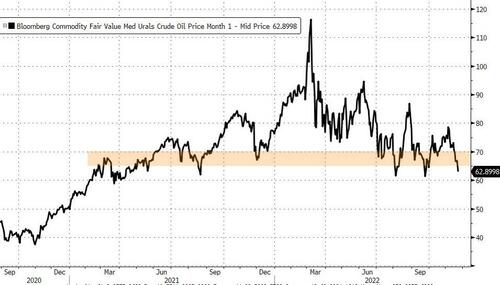 The biggest news is that the EU ambassadors are considering setting the Russian oil price cap at between $65 and $70 (which is around the level Russian crude currently trades at).

“A $65-$70 price cap on Russian oil would not mean that much considering the discount Urals is currently selling at,” said Ole Hansen, head of commodities strategy at Saxo Bank.

“The market is struggling to make its mind up given the multiple uncertainties regarding supply and demand.”

Vitol CEO Russell Hardy said “I’m only imagining this, but it’s going to be a number that looks like $60,” adding that the cap will be set at a point where it “causes the minimum amount of disruption” because the market is still facing a difficult supply scenario, particularly in Europe Western banks, insurance companies won’t want to participate unless there’s absolute clarity that the sale price is below the cap.

Amid a US-holiday-week-driven illiquid market, crude prices tumbled with WTI falling back to a $78 handle (holding around the pre-OPEC-production-hike rumor plunge)… 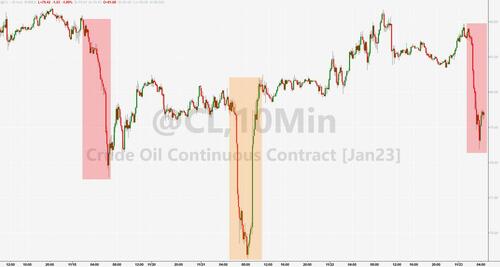 Ironically, as Bloomberg’s Javier Blas reports, “Just days before the US and Europe impose fresh sanctions on Russian energy – supposedly the strongest thus far – Moscow has lifted its oil output to the highest level since its invasion of Ukraine.” It seems European buyers are desperate to fund Putin’s war before the sanctions hit.

Russia has already made it clear it will not take this lying down saying multiple times that it would not sell oil to countries with a price cap in place.

“In my opinion, this is utterly absurd. And this is an interference in the market mechanisms of such an important industry as oil,” said Deputy PM Alexander Novak, who represented Russia at OPEC+.

“Companies that impose a price cap will not be among the recipients of Russian oil,” a Kremlin spokesman said on Friday, adding “We simply will not cooperate with them on non-market principles.”

Former US Treasury Secretary Steve Mnuchin panned the proposal to cap prices as “not only not feasible, I think it’s the most ridiculous idea I’ve ever heard.”

The chances of a G7 price cap on Russian oil being remotely effective are perhaps best summed up by a recent tweet from a Bloomberg energy and commodities columnist:

“My friends and I have agreed to impose a price cap on our local pub’s beer. Mind we actually do not plan to drink any beer there. The pub’s owner says he won’t sell beer to anyone observing the cap, so other patrons, who drink a lot there, say they aren’t joining the cap. Success.”

What is of course the most ironic thing about this oil price cap is the simple fact that once again politicians can only think linearly and one-step ahead. In their efforts to punish Russia and make this scheme as bearish as possible for oil prices, they will inevitably drive the price dramatically higher as Russia pulls its exports from any nations that agree with the price cap (as they have explicitly warned).