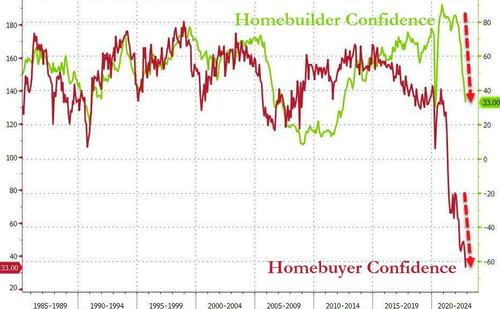 Last week, we observed that delusion and hope can only last so long (even when one’s salary depends on it) as US homebuilder confidence crashed to COVID lockdown lows in November after failing (or refusing) to see what was obvious to everyone for months, and what homebuyers were clearly feeling as prices soared along with mortgage rates and record low affordability for most Americans. And don’t get us started on homebuyer confidence: just look at the red line below which has taken out all previous record lows (including the post-2006 housing bubble) and is hitting new record lows every single month…

Well, slowly but surely this epic collapse in sentiment is spreading to market metrics, and while it will take between 6 and 9 months for real-time data to reach the badly lagging government-level CPI and PCE data, what’s taking place in the US housing market right now is nothing short of a meteor strike, with RedFin reporting in its latest market forecast that pending home sales fell the most on record in October and deal cancellations and price cuts hit record highs as buyers were spooked by the biggest mortgage-rate jump in over four decades. 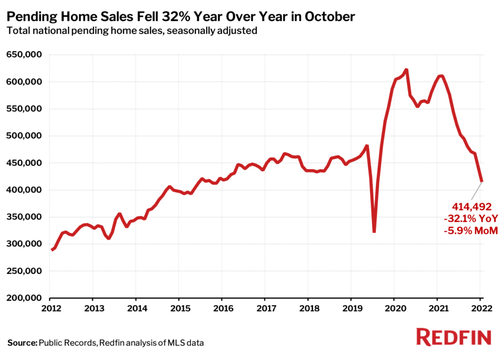 Nearly 60,000 home-purchase agreements fell through, equal to a record 17.9% of homes that went under contract. 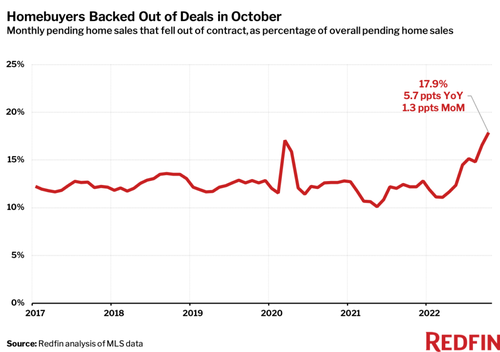 Meanwhile, almost one-quarter (23.9%) of homes for sale experienced a price drop, double the rate of a year earlier. 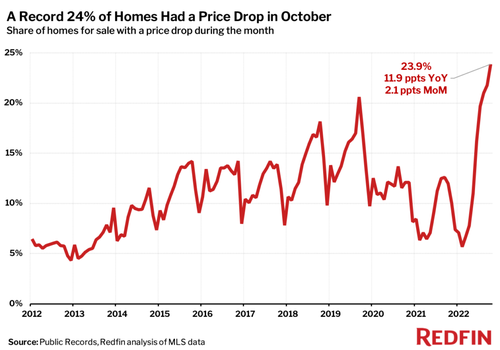 Surging mortgage rates also caused would-be sellers to stay put due to the lock-in effect. The average 30-year-fixed mortgage was 6.9% in October, up 3.83 percentage points from 3.07% one year earlier—the largest year-over-year increase during any month since 1981. That contributed to a 24% year-over-year drop in new listings, the steepest decrease on record aside from April 2020, when the onset of the pandemic brought the housing market to a near halt. 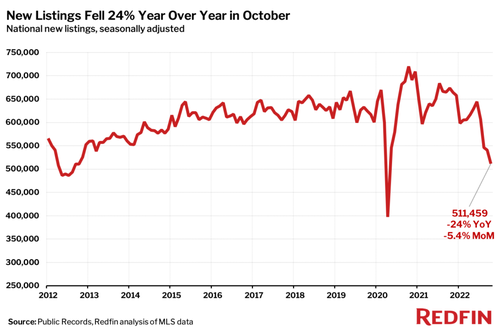 “The Fed’s actions to curb inflation are causing the housing market to slow at a pace not seen since the financial crisis,” said Redfin Economics Research Lead Chen Zhao. “There are already early but promising signs that inflation is cooling, which caused mortgage rates to drop last week. If that progress continues, buyers who recently backed out of deals may return to the market and sellers may be less inclined to slash their prices.”

Still, sale prices are only now just starting to fall as sellers, having held out until now, are starting to feel the need for liquidity and are increasingly hitting whatever bid they can see. And while the median U.S. home sale price declined 1.4% month over month—the largest slowdown during any October since 2012—it was still was up 4.9% from a year earlier. That will change very soon. 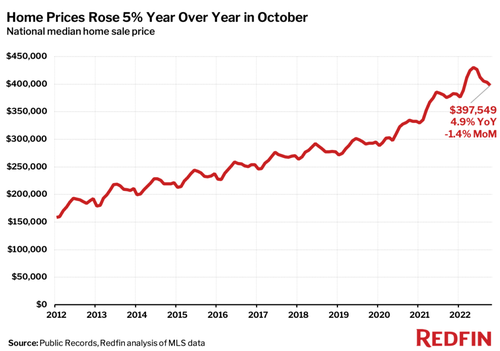 Prices may ease as listings linger on the market and competition slows. Homes that sold in October were on the market for a median of 35 days, up from 21 days a year earlier, and less than half (44.6%) of home offers written by Redfin agents faced competition. That compares with more than two-thirds (67.3%) in October 2021. 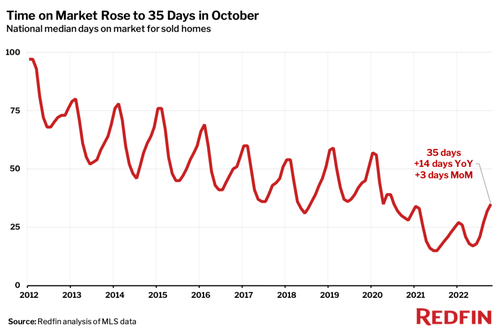 Here are the October highlights tabulated: 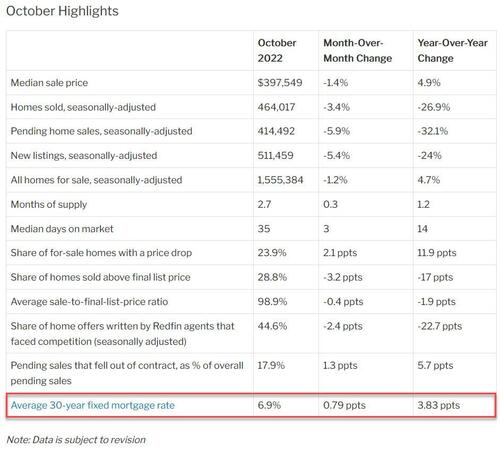 Again, none of this will show up in official US Dept of Commerce/BLS data until some time in the summer by which point the Fed may have hiked to 6% pushing the US into an all out depression.