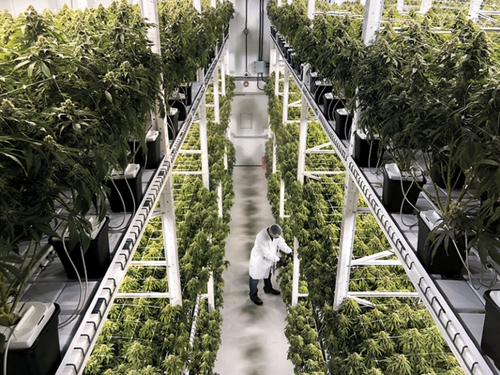 Federal legislators seeking to free state-legal cannabis businesses to use the country’s banking system have high hopes of finally pushing legislation across the finish line during the upcoming lame duck session.

After November’s latest batch of state referendums, recreational marijuana is now legal in 21 states — but remains illegal under federal law. As a result, current federal rules force even legal marijuana businesses to use cash instead of normal banking services.

That makes them prime targets for criminals, exposing owners, employees and customers to violent crimes and necessitating expensive security measures.

Ben Koltun, director of research at Beacon Policy Advisors, told MarketWatch that the Secure and Fair Enforcement (SAFE) Banking Act has about a 70% chance of passing by year end: “There’s a lot of positive momentum. It’s just can they come to agreement over some of the details that are outstanding?”

“I’m still holding productive talks with Democratic and Republican colleagues in the House and the Senate on moving additional bipartisan cannabis legislation in the lame duck. We are going to try very, very hard to get it done.”

It also stipulates that proceeds from a transaction involving activities of a legitimate cannabis-related business are not considered proceeds from unlawful activity — thus removing legit cannabis revenue from the scope of anti-money-laundering laws.

The SAFE Act has 180 cosponsors, including 26 Republicans. Despite the measure of bipartisan support, the looming Republican takeover of the House of Representatives is sparking urgency among the SAFE Act’s backers.

The House of Representatives has passed some form of the SAFE Act seven times, only for it to repeatedly die in the Senate. This key to finally enacting it is twofold, says Politico:

They must find a pairing of financial services and criminal justice reform-centered cannabis legislation that progressive Democrats and conservative Republicans can all accept. And then they must receive signoff from the leaders of the Senate Banking Committee, House Financial Services Committee, and the four corners of party leadership in both chambers.

“The parameters of a deal are pretty easy to imagine, but I am getting the sense that Republicans feel like Democrats are asking for too much in terms of concessions,” Tobin Marcus, senior U.S. policy and politics strategist at Evercore ISI, told MarketWatch.

Liberals have been making the perfect (in their eyes) the enemy of the good. Even the Drug Policy Alliance, which has backed cannabis reform, has opposed the SAFE Act, on the head-scratching premise that it “prioritizes marijuana profits over people.”

As Jacob Sullom wrote at Reason:

The bizarre implication was that marijuana merchants, who face an ongoing danger aggravated by the failure to approve banking reform, do not qualify as “people.” Michael Arthur, the 44-year-old Portland budtender killed in the 2020 robbery that Willamette Week mentioned, was a person. So was Jordan Brown, the 29-year-old employee who was killed last March during an armed robbery at World of Weed, a dispensary in Tacoma, Washington.

If liberals keep their demands within the bounds of reason and the SAFE Act passes, it would still leave state-legal cannabis businesses with plenty of financial headaches courtesy of the federal government. For example, they can’t even claim business deductions on federal income tax returns, to say nothing of the fact that their every transaction is a federal drug felony.

Of course, the federal government has no constitutional basis for criminalizing marijuana or any other intoxicant…but here’s hoping this particular chunk of the destructive prohibition regime get peeled back before New Year’s Day.