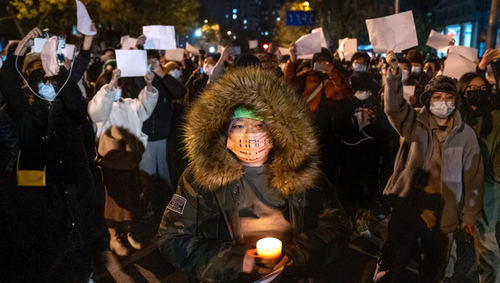 Mass protests against China’s ‘zero-covid’ policy have spread to Hong Kong, after demonstrators on the mainland began demanding that President Xi Jinping resign.

Around 50 students at the Chinese University of Hong Kong were pictured chanting “No PCR tests but freedom!” and “Opposed dictatorship, don’t be slaves!” while holding up blank pieces of paper – which have become a symbol of protest against China’s clampdown on freedom of expression, according to Axios. The blank paper protests were previously seen during the Hong Kong protests in 2020, and earlier this year during demonstrations against the Russian invasion of Ukraine.

“We are not foreign forces! We are Chinese youth!” pic.twitter.com/QraYzybqPR

Anti-lockdown protests spread throughout several cities over the weekend, including Beijing, Shanghai and Wuhan – which were largely muted on Monday after police moved out in force.

Meanwhile, police in Beijing, Shanghai and Hangzhou have reportedly been checking the phones of random citizens to look for unapproved social media apps. If they found Twitter or Telegram, the personal information would be taken down and the person would receive a warning. Any resistance would be met with a report, according to DW News correspondent William Yang.

Updates: police in Beijing, Shanghai and Hangzhou have all reportedly been checking people’s phones. #China https://t.co/VIxUhtoAct

On Monday, a BBC reporter who was arrested over the weekend while covering the protests reported that police were checking people’s phones for photos, and forcing people to delete them (or have them deleted).

People being forced to delete photos by the police today at the of the last two days of protests #shanghai #china pic.twitter.com/VS1kFSoh3x

In response to the protests, China’s Foreign Ministry says that the country has been “making adjustments” to Covid protocols “based on realities on the ground.” This follows a statement out of Beijing earlier in the month in which the CCP said they would “unswervingly adhere” to their zero-Covid policy, but would make it less disruptive.

“We will protect people’s lives and health to the greatest extent and minimize the impact of the epidemic on economic and social development,” said CCP officials, adding “But recent spikes in Covid cases have prompted cities to tighten protocols.”

On Monday Spokesperson Zhao Lijian said that China is actively implementing the 9th version of the pandemic protocols.

“We believe that, with the leadership of China’s Communist Party and the cooperation and support of all Chinese people, our fight against COVID-19 will be successful,” he told reporters.

China's Foreign Ministry spokesperson said the country has been “making adjustments” to its Covid protocols “based on realities on the ground,” despite the public anger across the country over its stringent Covid Zero policy https://t.co/OmnBHyj5Us pic.twitter.com/xDbzKXu8hg

Meanwhile, Apple is helping the CCP:

Apple has released a software update limiting the use of AirDrop in China in light of recent protests.

AirDrop was being used by protesters to transmit info directly phone to phone, bypassing the Great Firewall of China. pic.twitter.com/2UNtOeuTBZ