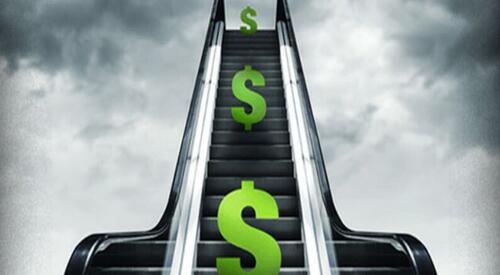 Authored by Jeffrey Tucker via DailyReckoning.com,

The midterm elections are over (no Red Wave), but nothing has changed. In fact, the Biden regime will probably become even more emboldened to pursue destructive economic policies because it will interpret the lack of a Red Wave as some kind of mandate.

Every day seems to be a day of spin, with every regime apologist assuring the public that inflation is getting better. Just look at the wonderful trend line! They point to the latest inflation numbers, which were down a bit from the month prior.

The regime insists that yes, inflation will vex us for a bit more time but will settle down in a few months. Plus, the president is working to fix this! And we know the American people are on board with him since no Red Wave materialized.

But in the footnotes, you’ll find the truth: it was a tiny drop and mostly for technical reasons and the main reason for the drop has already disappeared from the price trends.

Has any political propaganda on this topic ever been this ineffective? It’s truly a joke.

Where’s the Relief Coming From?

The producer price index that came out recently paints a clearer picture. It’s grim. It reveals no softening at all. In fact, it shows that there are plenty of coming price increases. Here is the index by commodities from 2013 to the present. 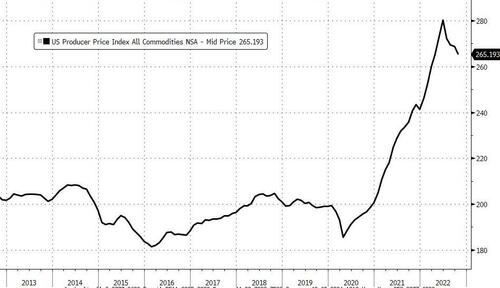 Remember how last year many people finally came to the conclusion that we had to learn to live with COVID? That was a smart choice because there was no way that the China-style suppression method could work.

But what does this mean?

The impact will be felt not just in terms of economics but in culture. Inflation causes a society-wide shortening of time horizons.

Let’s review some basics. All societies are born desperately poor, fated to live off foraging and just getting by. Prosperity is built through the construction of capital, which is the institution that embodies forward thinking.

To make capital requires the deferral of consumption: you have to give up some today in order to make tools that enable more consumption tomorrow. This means discipline and a future orientation. And it means, above all, savings that can be invested in productive projects. Only through that path can societies grow rich.

A key component of this concerns the stability of the medium of exchange. And not just stability: a currency that rises in value over time incentivizes saving and thus investing for the long term.

The late 19th century provided a good example of this. Under the gold standard, money grew more valuable over time, thus rewarding long-term thinking and instilling that outlook in the culture at large.

Inflation has the opposite effect. It punishes saving. It forces a penalty on economic behavior that is future-oriented. That means also discouraging investment in long-term projects, which is the whole key to building a complex division of labor and causing wealth to emerge from the muck of the state of nature. Every bit of inflation trims back that future orientation.

Living for the day becomes the theme. Taking what you can get now is the method and the theme. Grasping and spending. You might as well because the money is only going down in value and goods are in ever shorter supply.

Better to live hard and short and forget the future. Go into debt if possible. Let the devaluation itself pay the price.

The Seeds of Destruction

Once this attitude becomes instilled in a prosperous society, what we call civilization gradually devolves. If inflation persists, this kind of short-term thinking can wreck everything.

This is why inflation is not just about rising prices. It’s about declining prosperity, the punishing of thrift, the discouragement of financial responsibility, and a culture that gradually falls apart.

Another factor in reducing time horizons is legal instability. This was my first concern when the lockdowns began. Why would anyone start a business if governments can just shut it down on a whim? Why plan for the future when that future can be wrecked by the stroke of a pen?

Many people had assumed that this new path would be short-lived. Surely the politicians would wise up and stop the madness. Surely! Tragically, it got worse and worse. The spending and printing began and ramped up over time. It was a perfect storm of sheer madness, and now we are paying the highest possible price.

The Hinge of History

The most significant single danger to global prosperity now comes in the form of a devastating and deeply tragic wreckage of the country that was set to lead the world in finance and technology: China.

The WSJ summarizes the current pain:

China in 2021 accounted for 18.1% of global gross domestic product, according to International Monetary Fund data, behind the U.S. at 23.9% but ahead of the 27 members of the European Union at 17.8%. It accounts for almost a third of global manufacturing output, according to United Nations data from 2020. China’s economy expanded modestly at the beginning of the year but data for March and April point to a sharp slowdown.

The trouble there traces to the top. When Xi Jinping locked down Wuhan, the world celebrated him for achieving what no other leader in history had achieved: the eradication of a virus in one country. Even now, he gets accolades for this.

The rest of the world followed, and elites in all countries said that this path was the future.

Now the virus is on the loose all over the country, and the eradication methods are intensifying. This is crushing economic growth and now threatening genuine economic depression in the country that only a few years ago was seen as the greatest economic engine of the world.

It’s truly the case that Xi Jinping has put his personal pride above the well-being of all people in China. The scientists in the country know that he is wrong about this but no one is in a position to tell him.

We cannot really trust the data coming out of China but officially the rate of infection in that country is one of the lowest in the world. Billions more people need to get the bug and recover in order to have anything close to herd immunity. This means that lockdowns are the way for years to come so long as the present regime remains in power.

American prosperity for decades has relied on: relatively low inflation, fairly stable rules of the game, and widening trade with the world and China in particular. All three are at an end. Yes, it is heartbreaking to watch it all unfold.

I’m not defending China’s human rights abuses. Far from it. But the best way to end these abuses is through engagement, not estrangement.

We all need hope right now but it’s very difficult to find, since we are on a course that is not likely to be fixed for a very long time.