Treasuries Have No Time to Hear Powell’s Most Important Message 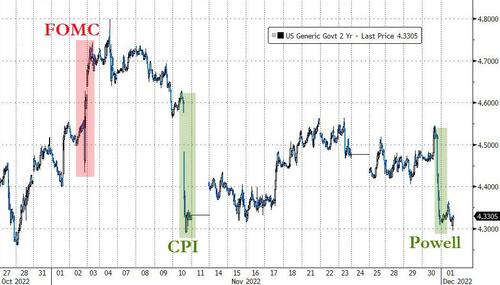 Fed Chair Jerome Powell said pretty much what one would have expected him to say on Wednesday. Just earlier this week, we saw how the markets sometimes hear what they want to hear — and it being the last day of the month, stock traders decided it was time to send valuations s-s-s-soaring.

Yes, Powell did remark that the Fed may dial down the pace of its increases as soon as this month, but it was an acknowledgement of what was already known. 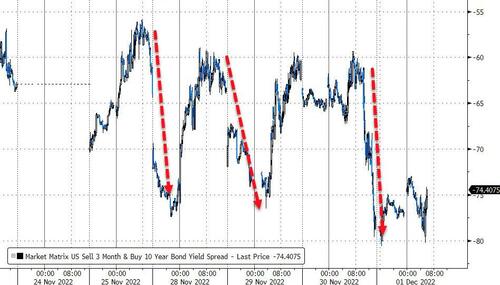 He did follow it up with these lines, which were completely lost on the markets:

“Given our progress in tightening policy, the timing of that moderation is far less significant than the questions of how much further we will need to raise rates to control inflation, and the length of time it will be necessary to hold policy at a restrictive level…

For good measure, he also remarked that the Fed is aiming for “significantly positive real rates,” a message he has delivered before.

Inflation-adjusted policy rates are now around -90 basis points, a far cry from levels where the Fed will look to stop. In other words, if key surveys about short-term inflation expectations stay around current levels, there is just no way the Fed can afford to stop before rates get to 5.25%. And that would probably be the lowest possible level. In other words, the current terminal rate of around 4.90% is not quite where it needs to be. In fact, the Fed has never really been able to wind down its tightening before real rates went significantly higher — which has been circa 200 basis points on average. 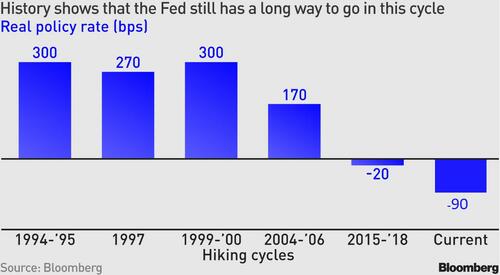 Powell doesn’t want to be remembered as someone who left his task on quelling inflation unfinished, and there was ample reiteration of that as well:

“History cautions strongly against prematurely loosening policy. We will stay the course until the job is done.”

That means one hard day of partying may be followed by many days being just hung over.