Lessons From The “Nifty Fifty” 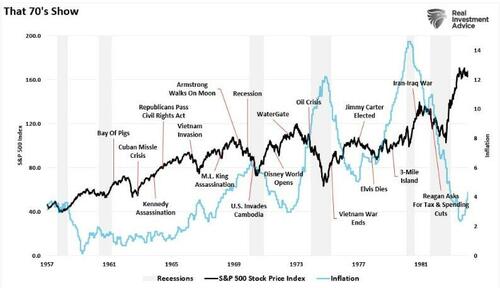 Recently, Bank of America discussed the “5-Lessons From The Nifty Fifty.” Of course, if you are unfamiliar with the importance of “The Nifty Fifty,” it is worth explaining.

The “Nifty Fifty” refers to the fifty most popular large-cap stocks in the 1960s and 70s. These “household” names traded at extreme valuations and included household names such as Xerox (XRX), IBM, Polaroid, and Coca-Cola (KO). Many of these Nifty-Fifty stocks had price-to-earnings (P/E) ratios as high as 100 times earnings. Despite high valuations, investors bought shares due to their proven growth records and dividend increases. Such occurred as inflation weighed on everything else.

“The greater fool in growth stocks isn’t the one who buys them but the one who sells them.” – Carl Hathaway, SVP at Morgan Guaranty, March 1973

Those stocks propelled the bull market of the early 1970s. But, unsurprisingly, as investors repeatedly learn, overpaying for value eventually reverts to the mean. The 1973-74 bear market became known as the “Black Bear Market,” as the massive decline convinced investors “equities were dead.”

As Michael Hartnett of BofA notes, there are some critical macro parallels between 1965-1980 and today:

We’re seeing evidence of all these phenomena today, albeit over a shorter period. Notably, the 60-70s were marked by repeating surges in inflation, recessions, and bear markets. For roughly 15 years, from 1965 to 1980, investors’ return after inflation was nearly a negative 10% annualized.

The Fed Repeating Itself

Today, we are seeing many market parallels. Investors are buying a handful of industry-leading stocks amid high inflation and an aggressive rate-hiking campaign by the Federal Reserve.

During the 70s, the Federal Reserve was entrenched in an inflation fight. The end of the Bretton Woods and the failure of wage/price controls combined with an oil embargo sent inflation surging. That surge sent markets crumbling under the weight of rising interest rates. Ongoing oil price shocks, spiking food costs, wages, and budgetary pressures led to stagflation through the end of that decade.

What was most notable was the Fed’s inflation fight. Much like today, the Fed is hiking rates to quell inflationary pressures resulting from exogenous factors. In the late 70s, the oil crisis led to inflationary pressures as oil prices fed through a manufacturing-intensive economy. Today, inflation resulted from monetary interventions that created demand against a supply-constrained economy.

The Fed repeatedly took action to slow inflationary pressures throughout the 60s and 70s. Such resulted in the repeated market and economic downturns. Most notable was the period from 1973-1974. As the Fed hiked rates from 5.5% to 13% to break inflation, the market tumbled by nearly 50%. 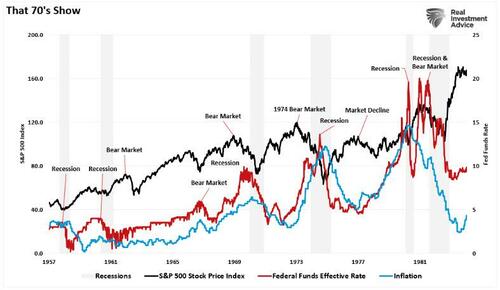 The Fed is once again fighting spiking inflation at a time when wages are also rising. Unsurprisingly, the problem is that while wages are rising and impacting corporate profit margins, they are not keeping up with the pace of inflation. 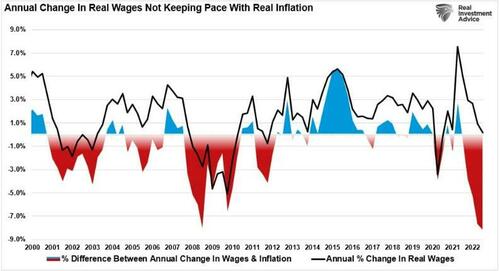 Much like the period of “The Nifty Fifty,” market leadership is ultimately vulnerable to rising costs, margin pressures, and earnings revisions. Such is why valuations remain the key to the end of the current bear market.

From 1960 to 1982, investors repeatedly suffered significant market declines as valuations reverted to substantially lower levels. As noted, the Federal Reserve steadily fought repeated bouts of inflation. The resulting market volatility pounded investors with bear markets and economic recessions. While many focus on the final 1974 bear market, most don’t realize there were three preceding bear markets. On an inflation-adjusted basis, real returns for investors over the entire period were substantially negative. Unfortunately, by the time 1982 arrived, and valuations had fallen from 23x earnings to 7x, the “Nifty Fifty” was no longer the portfolio of choice. 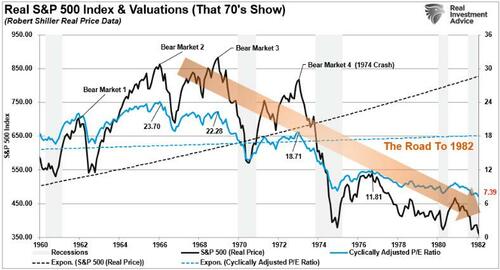 Unfortunately, despite the correction so far in 2022, valuations remain well elevated above historical bull market peaks. While the Federal Reserve is fully engaged in its inflation fight, earnings and margins have yet to adjust for slower economic growth rates in 2023. Such suggests that as that occurs, we may be another period where markets continue to underperform Wall Street expectations. 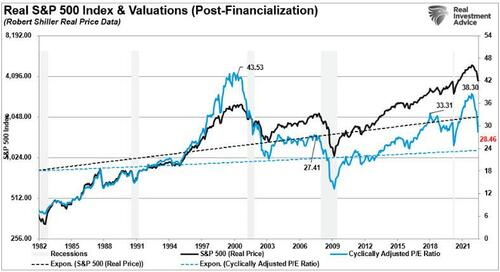 Given the high valuation levels, inflation, and an aggressive Fed emulating “Paul Volker,” it is possible a period of stagflation persists and markets trade in a fairly broad but frustrating range over an extended period. As Michael Hartnett suggests:

“Valuations are also key. Today’s 60/40 turmoil looks like historical episodes where markets overextend and ultimately correct with a vengeance. Peaks in the S&P 500 CAPE ratios have coincided with 60/40 tops that can take years to reset. The ‘Nifty Fifty’ experience saw valuations reset gradually, more like a slow burn than the flash in the pan we’ve become accustomed to in the last decade.”

5-Lessons From The Nifty Fifty

If we are indeed repeating some form of that “1970s show,” there are several things that investors should consider.

Risk management will become crucial to navigating what could be more volatile markets over the next decade than what we witnessed over the last. Such would be; historically consistent with a valuations reversion period and potentially a period with fewer monetary policy interventions by the Federal Reserve.

However, risk management also means there are “no safe strategies,” particularly when stocks and bonds may be more correlated than in the past. “Buy and hold” and “passive indexing” will most likely give way to more active strategies, and performance and capital preservation demands become key.

Most importantly, investors should begin to prioritize companies that have, and continue to have, strong balance sheets, resilient cash flows, and high levels of visibility into future growth. Companies with solid business models and a focus on shareholder stewardship (read dividends) will play a more critical role than companies with outsized future growth promises.

Let me conclude with Michael’s five lessons from the “Nifty Fifty.“

1) Don’t buy the leadership dip when the Fed is fighting inflation; and,

5) Even bear markets have some big winners.

Just something to think about as we head into a New Year.