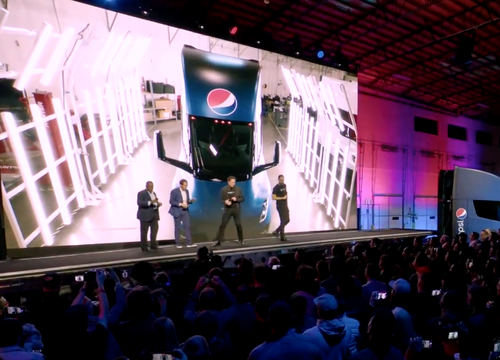 “If you’re a trucker and you want the most badass rig on the road, this is it,” Tesla Chief Executive Elon Musk said onstage at an event in Tesla’s Nevada plant Thursday evening while announcing the delivery of the first heavy-duty Semis to PepsiCo.

Deliveries of the Semi were initially slated for 2019 — this is the first delivery of a new vehicle for the company since the early 2020 launch of its Model Y crossover. Footage of the Semi played at the event showed the fully loaded big rig made a 500-mile journey from its Fremont plant to San Diego on one charge.

3x the power of any diesel truck on the road, with the efficiency to go 500 miles pic.twitter.com/0BghOBr9M6

During Tesla’s last earnings call, Musk projected 50,000 Semis would hit the highways by 2024.

Bloomberg explained, “electrifying big commercial vehicles is crucial to transitioning to more sustainable transportation,” adding trucks only account for 1% of the US vehicle fleet but produces a whopping 20% of all vehicle emissions.

Musk thanked PepsiCo for being a “great partner” and welcomed two of the company’s executives onstage to hand over the keycards in the first deliveries of the Semis.

For faster charging, Musk said a new liquid-cooled cable capable of one-megawatt charging would be unveiled next year. He said the technology is coming to the supercharger network.

Besides PepsiCo, Walmart Inc., Meijer Inc., and J.B. Hunt Transport Services Inc have been waiting for Semi deliveries since entering into non-binding reservation agreements in 2017.

However, not everyone is impressed with the Semi:

“Not very impressive – moving a cargo of chips (average weight per pack 52 grams) cannot in any way be said to be definitive proof of concept,” Oliver Dixon, senior analyst at consultancy Guidehouse, told Reuters.

And the electrification of the transportation sector will include massive investments in clean on-demand electricity generation, such as nuclear power. This is because the EV charging stops for trucks by 2035 could pull as much power as a small town.