500Bps Of Rate Cuts On Deck 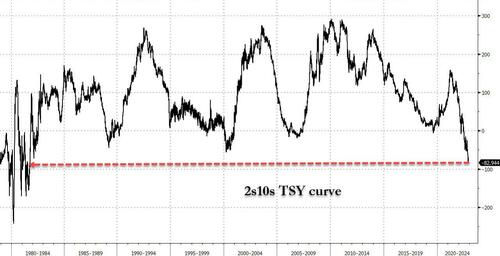 Powell Is Fighting Weight of History With “Higher for Longer”

The inverted yield curve shows why Fed chair Jerome Powell is fighting a losing battle in his desire to keep policy restrictive for an extended period. Without a radical re-upping of the Fed’s hawkish ante, pressure is likely to remain on Eurodollar spreads and the yield curve.

Like an obstreperous child, the Fed sometimes has a hard time getting the market to do what it wants (and sometimes enlists journalists to help). In its aim to keep rates for higher for longer, the market has listened to the Fed on the first part by bringing forward the expected peak funds rate and pushing it higher, but it has resolutely ignored it on the second part — pricing in deep cuts that happen soon after rates are expected to peak.

This is keeping pressure on the yield curve, leading to the deepest inversion in 2s10s since the early 1980s. I looked at this last week and there is a strong relationship between the peak size of the curve inversion and the subsequent total Fed rate cuts (this time adding in the two 1970s recessions). 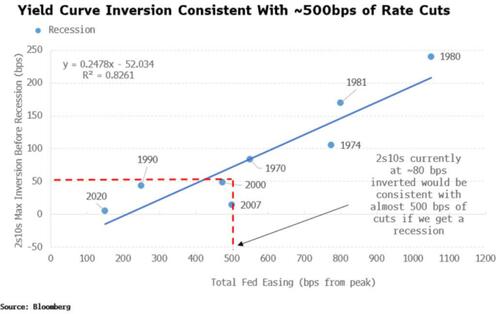 When lowering rates, of course the Fed can cut more if the starting rate is higher. We can account for this for by looking at the percentage cut from the peak rate. This leads to a weaker but still non-trivial relationship. It also leads to a negatively sloping line as falls from lower starting points (such as the 2007 and 2020 cutting cycles) are large in percentage terms. 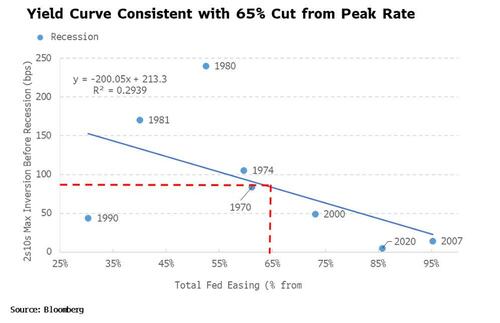 Nonetheless, the current inversion of 2s10s is historically consistent with 65% of cuts from the expected peak Fed Funds (~5%), i.e. 325 bps, if we get a recession.

There is a tautological aspect to this: a more inverted curve gives the Fed more “room” to cut. The Fed raises the stakes by saying it’ll keep rates high for a prolonged period, but the market calls its bluff and says the economy can’t handle it and bids up longer-term bonds, flattening the curve. Ultimately, though, in a self-fulfilling manner, the market wins and the Fed cuts, re-steepening the curve. 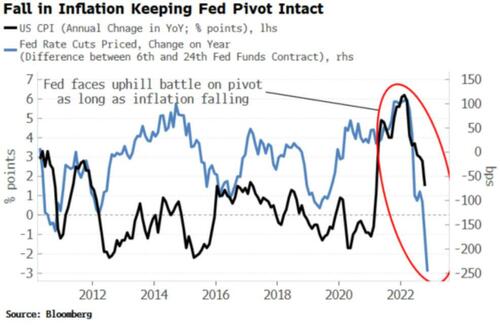 Both relationships would infer (but not necessarily predict) much deeper Fed cuts than the ~160 bps currently priced in by the Fed Funds curve if we get a recession (which looks highly likely). As long as the Fed keeps on insisting on higher rates and inflation keeps falling, history favors a larger Fed pivot and continued pressure on the yield curve.