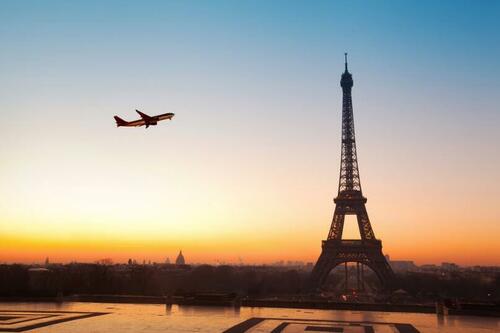 France is banning short-haul domestic flights when there is a regular and frequent train option that takes less than two and a half hours, after a 2021 climate law, No 2021-1104, received permission from the European Commission (EC).

Article 145.I of the law prohibits passenger flights “on all air routes within French territory for which there are several direct rail connections per day of less than two and a half hours,” according to the European Union decision report (pdf).

The proposal, which has been hailed by the French Greens and environmental lobbyists in Brussels alike, will directly affect three major air routes between Paris-Orly and Lyon, Nantes, and Bordeaux.

Remix News’ Thomas Brooke reports that an intention to improve rail services and decrease the journey duration could see routes from Paris and Rennes to Lyon and Marseille also axed.

The measure is expected to take several months to enter into force and should last initially for three years, with a review of its effectiveness undertaken after two.

In its decision, published on Dec. 2, the European Commission dismissed the protestations of French airports and airline lobbyists, who claimed that the ban would fall foul of competition laws.

It claimed, however, that “the negative impacts on European citizens and connectivity of any restriction of traffic rights must be offset by the availability of affordable, convenient and more sustainable alternative transport modes.”

“I am proud that France is a pioneer in this area.”

Karima Delli, a French Green MEP, hailed the European Commission’s approval of the ban, calling it a “victory” for environmental campaigners, but insisted that “the threshold must be raised to four hours, and above all, include private jets in the ban.”

A four-hour threshold would effectively see the abolition of all internal flights across France.

“The French ban on short-haul flights where quick train connections exist is a baby step, but it’s one in the right direction,” said Thomas Gelin, Greenpeace’s EU climate campaigner.

However, some Green Party politicians want to extend the ban to cover four-hour train journeys, while other European lawmakers are hoping to expand the coverage to the whole continent with upcoming new railway lines like the European Uunion’s TEN-T project.

As The Epoch Times’ Naveen Anthrapully points out, detractors of the new rule, like the Net Zero Watch, commented in a tweet, “Just another freedom Net Zero will be taking away. #CostOfNetZero.”

Perhaps most notably,  The EC noted that the new rule will not have much of an impact on the environment because air traffic on the routes had considerably declined since the pandemic shutdowns.

“Banning those routes will therefore not lead to an actual reduction in emissions. However, unquantifiable environmental benefits may nonetheless be generated since air carriers potentially interested in operating these routes will be prevented from doing so,” said the commission in the report.

“Expect much more of this,” tweeted Canadian conservative scholar Jordan Peterson in response to the news.