Another Pivot: Bank of Canada Hikes 50bps As It Signals Potential Pause With Inflation Peaking 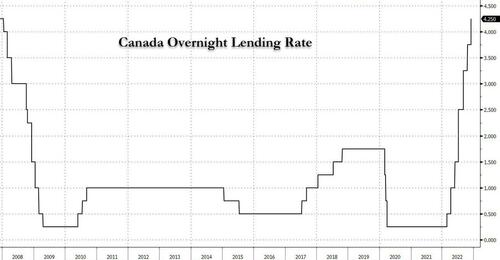 Amid a split economist panel, with roughly half expecting a 25bps rate hike from the BOC and the other half looking for 50bps, moments ago the Bank of Canada announced a 50bps hike, its sixth consecutive outsized increase to interest rates, but in a dovish pivot suggested that rates may not need to rise further and as Bloomberg notes, the statement-only decision opens to the door to a pause in the rate hiking cycle.

In the BOC statement, the bank said that the “looking ahead, Governing Council will be considering whether the policy interest rate needs to rise further to bring supply and demand back into balance and return inflation to target.”

The new language of “considering whether” is an important change from October’s statement, which noted that the bank “expects that the policy interest rate will need to rise further.” That language suggests larger magnitude increases to borrowing costs have probably ended, and that policymakers are open to a break in their aggressive hiking cycle as they weigh the need for fine-tuned adjustments.

To repeat: Wednesday’s statement-only decision marks the first time since the start of the tightening cycle that the language on further hikes has changed. In previous decisions, the bank included a hawkish line indicating policymakers expected the benchmark rate would need to rise further.

At the same time, the bank said that “inflation is still too high and short-term inflation expectations remain elevated,” and that above-target inflation risks becoming entrenched which is why the BoC is “resolute in our commitment to achieving the 2% inflation target and restoring price stability for Canadians.” But countering that too, the BOC noted that “three-month rates of change in core inflation have come down, an early indicator that price pressures may be losing momentum.”

Separately, policymakers said Canada’s 3Q GDP print was “stronger than expected,” but noted higher borrowing costs are starting to restrain domestic demand. As a result, an economic slowdown is still expected by policymakers: “data since the October MPR support the Bank’s outlook that growth will essentially stall through the end of this year and the first half of next year.”

Despite stronger-than-expected gross domestic product in the third quarter, the economy is still operating in excess demand. Commodity exports are robust and the labor market is tight, yet recent data support the bank’s view that “growth will essentially stall through the end of this year and the first half of this year.”

A speech and press conference Thursday by Deputy Governor Sharon Kozicki may shed more light on the bank’s thinking.

At their last meeting, Macklem and his officials surprised markets and most economists by opting for a 50 basis-point hike, down from a 75 basis-point increase in September and a full-percentage-point jolt in July. Before Wednesday’s move, the Bank of Canada had already raised the overnight rate to 3.75% from the emergency pandemic low of 0.25% that held until March.

According to Bloomberg, most economists view Canada’s economy as more sensitive to higher rates than the US and say the Bank of Canada can comfortably let its benchmark diverge from the Fed’s by as much as 100 basis points. 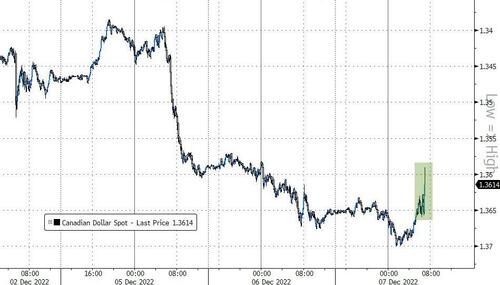 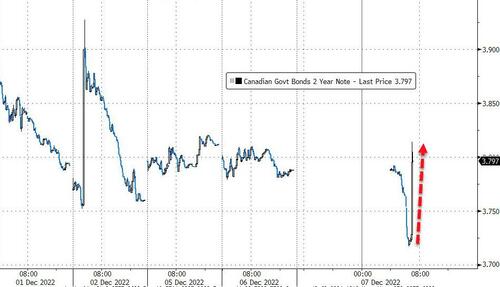 … but are already reversing as the market realizes that this may be the last rate hike by Canada.