Coming into this week, SpotGamma expected that markets would grind ahead into next week’s key data points, starting with 12/13 CPI.

This view was driven by the fact that short dated volatility sellers should come into a positive gamma environment, taking advantage of the blackout in data-driven volatility triggers.

However, it seems like some flows were unlocked on Monday morning, and the options market was not anticipating or signaling the risks or size.

You can see this in the chart below wherein we plotted ES futures against the 2 year yield & crude oil futures. You can see there are synchronized moves in these assets around data from last week, but then there is this move that occurs early on Monday morning – before the 10AM ISM print.

Based on SpotGamma‘s metrics for identifying options hedging flows and positioning, the driver(s) of these recent selling flows in stocks are non-obvious, but appear large and smell like coordinated stock liquidations.

We’d note here that while we have no first hand knowledge, there are whispers around of tax loss selling, and funds unwinding energy positions.

Aside from Jay Powell’s apparently ‘dovish’ address which sent stocks exploding higher on a short-squeeze, the last two weeks have seen almost constant selling pressure during the day-session for stocks, and relative calm during the overnight session.

To us, something along these lines makes sense.

One of our first institutional roles was on a program trading desk.

This role was to implement large “programs” which are trading giant baskets of stocks.

For example – some pension fund will come in and need to sell $100mm of the S&P500 basket.

You don’t sell futures here, you actually spread out the $100mm over all stocks in the S&P500.

With big orders you cannot simply hit “market sell” because you move the market too sharply.

So, you the order into an algorithm like a VWAP.

The algo starts selling at 9:30 AM, and stops at the close.

And, for really large orders, you may spread it out over a few days.

This smells an awful lot like cash stock sales, and also syncs with the idea that the options market wasn’t privy to the catalyst.

In fact in the last month or so, the S&P has lost around 40 points during the open-to-close day-session (and that includes the 123 point surge after Jay Powell spoke ‘dovishly’) while the close-to-open night session has gained 70 points… 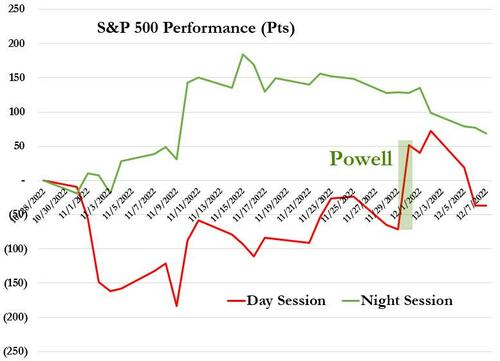 Nevertheless, there is hope for short-term bulls, as the upside here is that we believe that the options flows have been fairly positive over the last few days.

HIRO is not reflecting large put buyers – but some call buying. We did see some longer dated put positions added (and the VIX up a bit), the options flows generally don’t speak of major fear/protection.

In other words – we don’t see the options market as currently inducing volatility.

We think that if there was an options induced negative feedback look we’d get more “bounce” or mean reversion after larger drawdowns.

Instead, futures just drop and stick as shown above. 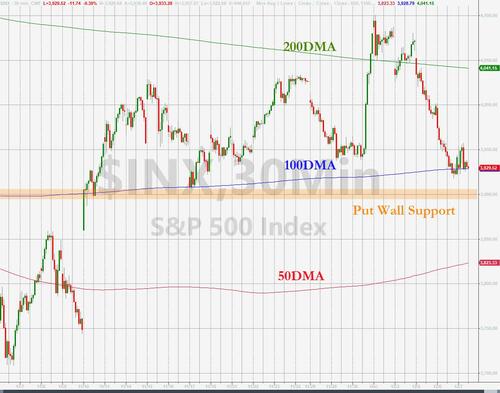 However, below 3900 Put Wall support, we think that volatility changes materially.