Class 8 Truck Orders: Nowhere To Go But Down 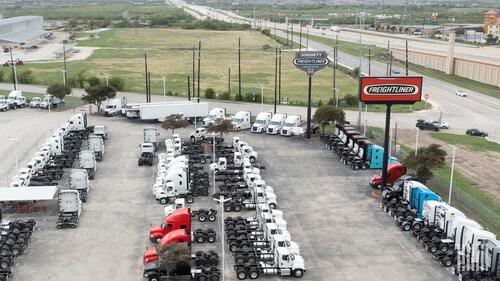 By Alan Adler of FreightWaves

Class 8 truck orders posted a respectable 33,000 units in November. But they fell for a second consecutive month after record bookings in September. Supply chain issues, growing backlogs and a slowing economy are likely to prevent big monthly orders in the near term.

“We continue to expect a freight recession, and an eventual [mild to medium] economic recession. But OEMs at this point have clear visibility to a strong [first half of 2023] barring any unforeseen cataclysmic events.”

That hedging leaves open the possibility of another month like September when orders reached an ACT-reported 53,700 after months running at half that pace. But with backlogs of unbuilt vehicles rising, a repeat is unlikely.

FTR Transportation Intelligence, an ACT competitor, reported preliminary North American Class 8 net orders at 34,300 in November, well off its September total of 56,000. Even with the moderating intake, November orders rose 254% year over year compared to a period when OEMs were canceling orders because they took in more than they had parts to build. 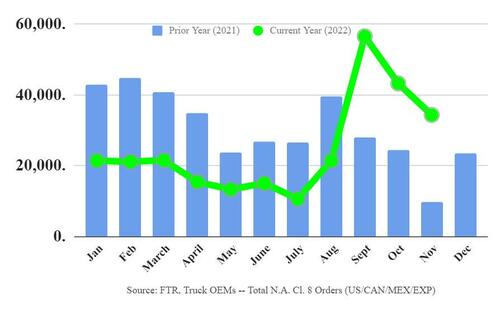 “Much of the year appears to have been slotted for production in 2023,” said Jonathan Starks, FTR chief executive officer and chief intelligence officer. “That means further moderation of levels as we get into the new year.

“The market remains strong despite the economic uncertainties, and production still will be limited to some extent by supply chains and labor.”