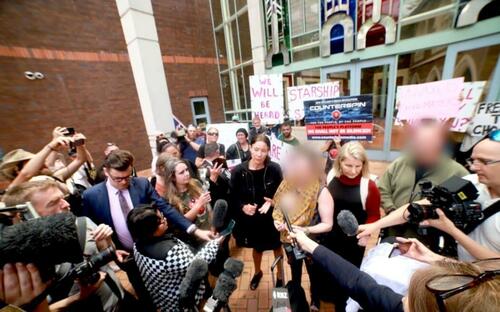 New Zealand’s High Court on Wednesday took custody of an infant whose parents demanded he only receive blood from donors who are unvaccinated against Covid-19 for an urgently needed heart surgery to repair a congenital defect.

“He remains in urgent need of an operation, and every day that the operation is delayed his heart is under strain,” reads the order, citing one of his doctors.

The parents, Cole Reeves and Samantha Savage, rejected doctors’ assertion that using blood donated from outside normal channels was “impractical” for the child’s circumstance, and that surgery without donated blood was “not an available option.”

Apparently an unvaccinated volunteer with the same blood type is not ‘an available option.’

Judge Ian Gault ruled that it was in “Baby W’s best interests” for the court to take temporary custody of him so the surgery could be performed. The infant was placed under the guardianship of the court from Wednesday until he recovers from surgery, but not beyond January 31st, the Washington Post reports.

The surgery, which is set for Friday morning, is estimated to take 48 hours to complete. Two doctors were appointed as Baby W’s legal representatives for the purpose of consenting to surgery, and Reeves and Savage were appointed as his representatives for “all other purposes.” Doctors said they would “take the parents’ views into consideration” whenever possible — as long as doing so wouldn’t compromise “Baby W’s interests.”

The decision followed a tense period of several weeks fraught with baseless claims, according to the order. -WaPo

Reeves and Savage how now tried to stop doctors preparing the infant for the operation on Friday – which the High Court responded to by ordering the parents not to obstruct staff at Starship Hospital.

Te Whatu Ora has asked for the police to step in and also asked the court if officers are entitled to use reasonable force to remove the baby from the parents.

In his decision yesterday, Justice Gault also said doctors from Te Whatu Ora had been made agents of the court to carry out the surgery, including the adminstration of any blood products.

In a minute issued this evening, Justice Gault said he had been informed by the lawyer acting for Te Whatu Ora that the baby’s parents had prevented doctors from taking blood tests, performing a chest X-ray and performing an anaesthetic assessment.

The lawyer understood the parents had threatened to lay criminal charges against medical staff if they went ahead, Justice Gault said. –RNZ

“You touch our child and we will press criminal charges against you,” the parents told hospital staff, according to the filing.

The parents’ lawyer, Sue Grey, petitioned the judge, asking for the opinions of two US doctors to be considered, adding that it would be “extreme overreach” if police were called in to remove the baby from his parents in order to perform the surgery.

Justice Gault denied the request, saying Grey was effectively seeking to re-open the case he had already ruled on.