Peter Schiff: The Markets Are Worried About The Wrong Fed Mistake 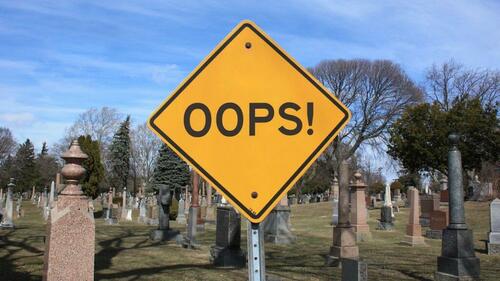 Stocks have struggled in recent days due to some better-than-expected economic data and more hawkish talk from Fed officials. This has revived fears that the Federal Reserve could make a mistake and raise rates too high and keep them there too long, sparking a recession. In his podcast, Peter Schiff said the markets are worried about the wrong mistake.

Peter said he thinks there is still a chance that St. Nick will show up with a Santa Clause rally in stocks.

I don’t expect this rally to have too much behind it, meaning I don’t look for much in the way of upside. But I do think there’s a good chance we’re going to do another short squeeze before the next leg lower, which I think will happen in January, if not even before the end of December. So, to the extent that we get the Santa Claus rally, you don’t want to buy it. In fact, you don’t even want to buy in anticipation of the rally, because it may not even happen, and you’re going to be left with coal in your stockings.”

Peter said the market reaction to Jerome Powell’s recent speech got him thinking about the possibility of a Santa Claus rally. The markets ignored Powell’s hawkish talk about interest rates going higher and staying there longer and focused totally on the prospect of a smaller rate hike in December. But in the last few days, several Fed members have repeated Powell’s messaging about having to go higher for longer.

Also, there was some better-than-expected economic news. The ISM services index came in higher than expected along with factory orders in October. It was something of a one-two punch. As soon as the data came out, the S&P Futures sold off sharply. Gold also charted a big drop.

The market perception is that this stronger-than-expected economic data will prevent the Fed from recognizing that the inflation threat has subsided. That will lead to the Fed making a mistake and raising rates too much and leaving them too high for too long, causing an unnecessary recession.

All of this is scaring the stock market. But the reality is we’re already in recession, and we don’t have a strong economy.”

Peter said of course we’ll occasionally get data that is stronger than expected. But most of the data has been weaker than expected. And a lot of the strong data — for instance, the non-farm payroll report — is only superficially strong. When you dig beneath the surface, you find a different story.

Don’t accept the numbers at face value. Dig a little deeper and look at what’s actually happening. Because if you do that with the jobs numbers as I’ve been doing on this podcast, the jobs market isn’t strong. The jobs market is weak.”

Peter emphasized that the risk everybody is worried about is the wrong risk.

It’s not that the Fed is going to raise rates too much. It’s that they’re not going to raise them enough. It’s that they’re going to pivot too quickly. It’s not that the Fed is going to mistakenly believe that the economy is strong and then overestimate how high inflation will be. It’s the weak economy that’s going to cause inflation to be higher. Because as the economy weakens, production will decline, but money printing will expand. In fact, at some point, the Fed will pivot in response to a much weaker economy than it expected, and that’s when the dollar is really going to tank, and that’s when consumer prices are really going to take off.”

Peter said the inflation that we’re experiencing now will kick into a much higher gear during the next economic downturn.

Everybody just assumes that when the economy weakens, so too will inflation. No. The weakening economy is going to strengthen inflation because inflation is the expansion of the money supply. And the weaker the economy gets, the more the Fed is going to expand the money supply to try to stimulate it. And as the return of quantitative easing causes a mass exodus out of the US dollar from foreign central banks and private holders, then the falling dollar is going to push consumer prices up dramatically.”

The weakening dollar will also cause the trade deficit to widen, putting downward pressure on GDP, and creating a self-perpetuating spiral of inflation and economic weakness.