Authored by Zack Voell via BitcoinMagazine.com,

Bear market history never repeats, but it often rhymes and these six datasets show how the bitcoin mining industry is faring today…

Bitcoin mining companies continue struggling to survive the ongoing bear market. Dreams of outperforming bitcoin as a public mining company are long gone. Bankruptcies and lawsuits make routine headlines. And even Wall Street analysts that were once bullish on bitcoin mining investment opportunities now say they’re “pulling the plug” until the market improves. But exactly how bad is the current bear market?

It’s always darkest before dawn, as the adage says. And compared to previous bear markets, the mining industry looks much closer to the end of a turbulent market phase than the beginning of it. This article explores a bunch of data sets from the current and previous bear markets to contextualize the state of the industry and how the mining sector is faring. From hardware lifecycles and miner balances, to hash rate growth and hash price declines, all of these data tell a unique story about one of Bitcoin’s most important economic sectors.

When bitcoin’s price drops, it’s not surprising that dollar-denominated mining revenue also drops. But it has – a lot. Roughly 900 BTC are still mined every day and will be until the next halving in 2024. But the fiat price for those bitcoin has plummeted this year, meaning miners have far fewer dollars for expenses like electricity, maintenance and the servicing of loans.

As the chart below demonstrates, in November, the entire bitcoin mining industry earned less than $500 million from processing transactions and issuing new coins. The bar chart below shows this monthly revenue compared to the past five years. November mining revenue marks a two-year low for monthly earnings. 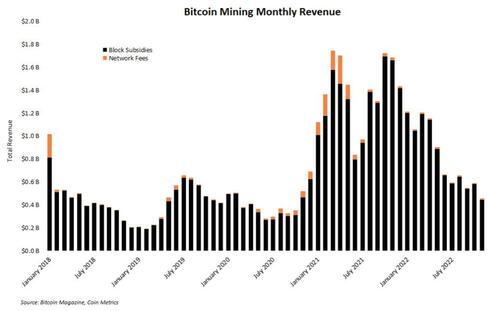 This past month marked a two-year low for Bitcoin mining company revenue. 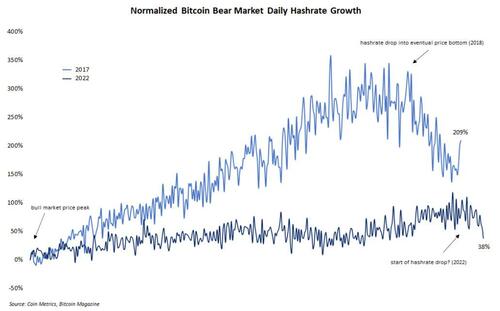 So far in this bear market, Bitcoin hash rate has only grown.

But one thing that is obviously missing from the above chart is a correction in hash rate growth during the later period of the bearish phase. In 2018, for example, the growth trend clearly changed course and dropped as the market eventually found a low for bitcoin’s price. But in the current market, hash rate has only grown. Perhaps a slight drop in hash rate through late November signals a trend change, but the question is still open.

Perhaps the most brutal bitcoin mining chart of all shows the drawdowns of publicly-traded mining companies this year. It’s no secret that the past year has been brutal for bitcoin, other cryptocurrencies, and the global economy in general. But mining companies in particular have been clobbered. Over half of these companies have seen their share prices fall over 90% since January. Only two — CleanSpark and Riot Blockchain — have not dropped more than 80%.

Mining companies in general are often considered to be a high-beta investment in bitcoin, meaning when bitcoin goes up, mining stock prices go up more. But this market dynamic cuts both ways, and when bitcoin falls, the downside for mining stocks is even more brutal. The bar chart below shows the massacre these stocks have endured. 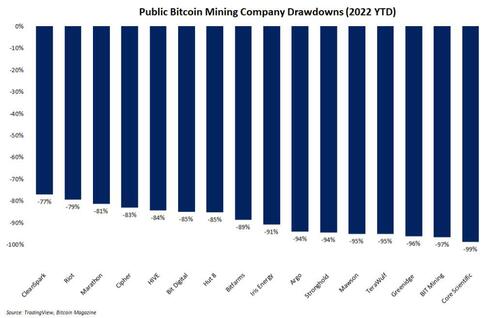 Bitcoin mining stocks have been massacred.

THE RISE AND FALL OF BITCOIN MINING’S ‘AK-47’

An underappreciated hallmark of the current bitcoin bear market is the precipitous decline in hash rate contributed by Bitmain’s Antminer S9 machines. This model of mining machine is occasionally referred to as the “AK-47” of mining because of its durability and reliable performance. And at one point in the 2018 bear market, the S9 was king. Nearly 80% of Bitcoin’s total hash rate came from this Bitmain model during the depths of the previous bear market.

But the current bear market tells a completely different story. Thanks to new, more efficient hardware and a vice-grip squeeze on mining profit margins, the percentage of hash rate from S9s dropped below 2% in early November. The annotated line chart below shows the rise and fall of this machine. 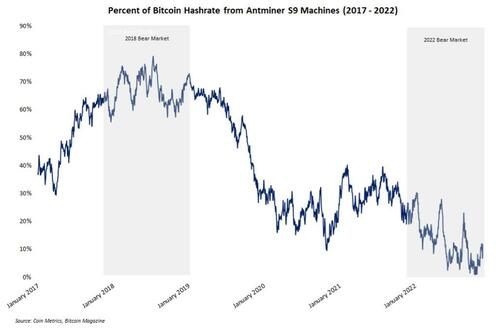 The Antminer S9 has seen a remarkable fall.

MINER BALANCE RETRACES ITS SELL OFF

The past few months have been disastrous for the “crypto” industry as exchange wars, insolvent custodians and other forms of financial contagion swept the market. Many bitcoin investors like to assume their segment of the industry is mostly insulated from the chaos of the rest of “crypto,” but this is usually false. In the case of miners, who are notoriously bad at timing the market, some panic was evident as address balances and miner outflows appeared to drop and spike, respectively.

But this activity was short lived. The line chart below shows that miner address balances have almost fully retraced their drop from late September through October. In short, miners appear to be back in HODL mode, impervious to exogenous market events. Whether the bear market is over or not is unknown. But miners seem to be accumulating more than selling. 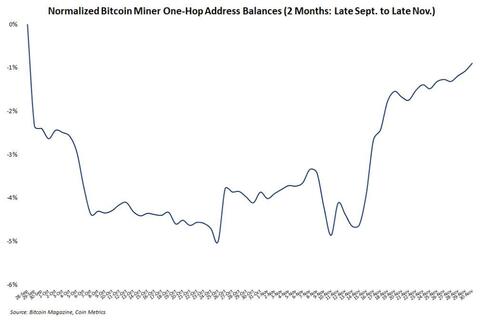 Miners appear to be back in HODL mode.

Hash price is one of the most popular economic metrics for miners to track, even though few people outside of the mining sector understand it. In short, this metric represents the dollar-denominated revenue expected to be earned per marginal unit of hash rate. And like everything else in the bear market, hash price has fallen significantly. But its decline is not unusual, especially when it’s compared to the hash price decline in 2018.

Shown in the chart below are normalized hash price drawdowns from 2018 and 2022. Readers will notice the fairly similar slope and size of the drawdowns. 2018 was slightly steeper. 2022 to date has been shallower but longer. But both were and are brutal for fledgling mining operations. 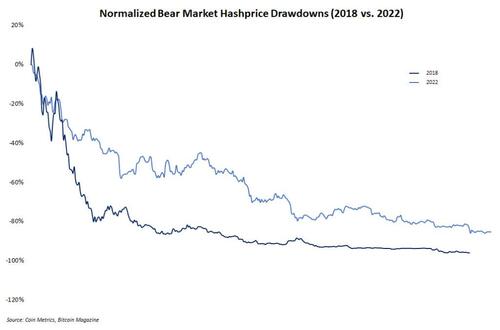 This 2022 hash price drawdown has been shallower but longer than its 2018 equivalent.

THE NEXT PHASE OF MINING

Boom and bust cycles are a natural series of events for any properly functioning market. The bitcoin mining sector is no exception. For the past year, mining has seen its weaker, unprepared operators weeded out as the excesses from the bull market are brought to account. Now, in the depths of a bearish period, the real builders can continue to expand their operations and build a solid foundation for the next phase of euphoric bullishness.