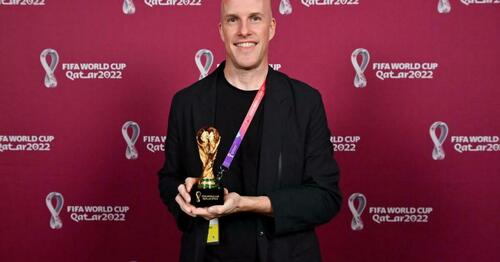 American journalist Grant Wahl collapsed and died while covering the 2022 World Cup in Qatar. He was 48 years old.

Wahl was reportedly stricken in the press area of the Argentina-Netherlands match at the Lusail Iconic Stadium.

Officials said he received immediate medical attention and was subsequently transferred to Hamad General Hospital prior to his death.

The U.S. Soccer federation posted on its Twitter account that it was “heartbroken” to learn of Wahl’s passing.

“Grant made soccer his life’s work, and we are devastated that he and his brilliant writing will no longer be with us,” the league said.

His agent, Tim Scanlan, told the New York Times that Wahl had gone into acute distress in the final minutes of a quarterfinal match, which he was covering from the press tribune.

US media seated near him said Wahl fell back in his seat in the media tribune at Lusail Iconic Stadium during extra time and reporters adjacent to him called for assistance.

The night before the quarterfinal match at which Wahl passed away, he posted his daily report from the event, which was critical of Qatari officials’ apathy toward migrant workers who had died building the stadiums used for the World Cup. 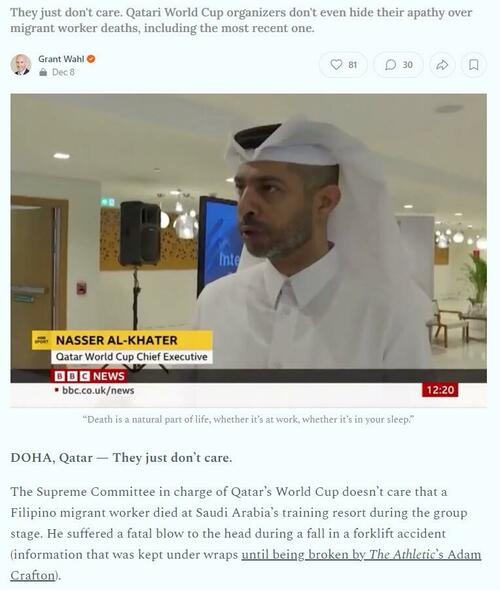 Wahl, grabbed headlines in the early days of the tournament when he showed up to a match wearing a t-shirt expressing support for LGBT rights, according to NPR. He was not allowed to enter and was detained by Qatari authorities before later being released. Homosexuality is illegal in Qatar and there have been reports of “abuse” and “ill-treatment” against LGBT individuals in the country, according to Human Rights Watch.

Free to read: What happened when Qatar World Cup security detained me for 25 minutes for wearing a t-shirt supporting LGBTQ rights, forcibly took my phone and angrily demanded that I remove my t-shirt to enter the stadium. (I refused.) Story: https://t.co/JKpXXETDkH pic.twitter.com/HEjr0xzxU5

His brother Eric, who is gay, said through tears that he believes his brother may have been killed:

“I am the reason he wore the rainbow shirt to the world cup. I do not believe my brother just died, I believe he was killed.”

Eric, who is gay, said he believes his brother may have been killed. Grant was arrested in Qatar for wearing a rainbow while covering the 2022 World Cup. pic.twitter.com/TTWmOtvmlK

Speaking on the podcast Futbol with Grant Wahl days before his death, he described feeling a “tightness” and a “pressure” in his chest, but indicated he had received treatment for it and had begun feeling better.