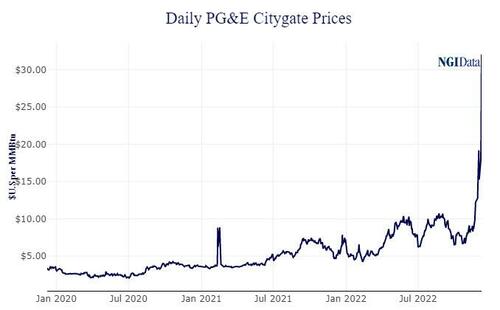 Authored by Leticia Gonzales via NaturalGasIntel.com,

Against a backdrop of mostly mild weather across the Lower 48, winter unleashed its fury on the West Coast a bit early this season. The frigid temperatures and unusually heavy precipitation have fueled natural gas demand at a time when storage inventories are low, a drought has reduced hydro-electric power supplies and regional utilities are having trouble receiving coal deliveries.

The result: historically high natural gas prices that have surged to levels not seen since the summer of 2018. The surge in prices has spread across the Pacific Northwest, farther south throughout California and inland across the Rockies.

On Thursday, Northern California’s PG&E Citygate recorded spot natural gas prices as high as $36.00/MMBtu. SoCal Citygate cash reached a $33.00 high, while Malin hit $32.00. And that only proved to be batting practice.

“This sustained period of high prices has never happened before. There’s a lot of different things going on, and they’re all falling at the same time.”

Is It Really That Cold In California?

Bitter winter weather has slammed the West Coast this month, driving up heating consumption in a region that normally sees its highest energy needs in the summer.

The National Weather Service (NWS) said widespread heavy precipitation would begin to blanket the Pacific Northwest and Northern California on Friday and further over the weekend into the Northern Rockies, Great Basin and the rest of California. Anomalously high moisture associated with an atmospheric river was expected to usher in heavy mountain snow, as well as strong rains for lower elevations along the West Coast.

Snow totals should generally range between six inches and a foot for the higher elevations, according to NWS forecasters. Lighter accumulations of up to three inches were forecast for the interior valleys.

In the Sierra Nevada mountain range of California, several feet of snow were expected, while excessive rainfall was possible along the coast of southern Oregon and Northern California. Rainfall totals could reach up to four inches, NWS said.

Even still, with temperatures forecast to climb into the 60s in Los Angeles and into the mid-50s in San Francisco, “it’s not really that cold,” said Fuel and Purchased Power’s Marlon Santa Cruz, manager for the Los Angeles Department of Water and Power (LADWP). The executive said a key issue facing the region was that storage inventories are lagging behind.

Pacific Gas & Electric Corp. (PG&E) in the summer of 2021 reclassified 51 Bcf of storage inventories to cushion gas, rather than working gas. It marked the largest reclassification in any one region, with some market observers calling the scale of the change “preposterous.”

Williamson said the problem wasn’t with the reclassification. It was that PG&E hasn’t rebuilt working gas inventories.

As of Dec. 2, Pacific stocks stood at only 217 Bcf, which is more than 18% below year-earlier levels and nearly 24% below the five-year average, according to the U.S. Energy Information Administration.

The Pacific is the only region that continues to fall significantly short of historical levels. After a string of above-average injections in the late fall, Mountain stocks sit about 6% below the five-year average. East inventories sit around 2% below that level. The South Central region, meanwhile, is now at a modest surplus.

“That’s the head of the nail,” Williamson said.

“If we had plenty of gas in storage, this wouldn’t be happening. Now, everyone is a hostage.”

With a client base that include commercial greenhouses and other small customers, the exorbitant prices are concerning, according to Williamson. He worries that if prices were to remain elevated – or climb even higher as the winter progresses – customers may be unable to pay their bills.

What’s more, the higher prices are not limited to California. In the Desert Southwest, spot gas prices at El Paso S. Mainline/N. Baja surged to $35.75 on Thursday, while the KRGT Del Pool rose to $32.85. By Friday, cash prices in the region also had rocketed to $55.00.

“At what point in time does a number get so high that people go bankrupt and stop paying their bills? I think we’re getting close to that point,” Williamson said.

He likened the situation to the fallout of Winter Storm Uri, where utilities filed for bankruptcy and spawned lawsuits and investigations into market manipulation. “People are going to grab lawyers instead of their pocketbooks.”

LADWP’s Santa Cruz agreed the storage situation in the West is a concern.

However, while stockpiles in Northern California remain short of what the market sees as comfortable through the winter, Aliso Canyon storage in Southern California has been “a savior” for the region as it copes with the heightened demand, he said. The storage facility, operating at a reduced capacity following a major leak in 2015, has often had to serve as a buffer during periods of strong demand.

In November 2021, the California Public Utilities Commission voted unanimously to increase the amount of gas stored at Aliso Canyon ito boost winter supplies for gas and electric customers. The decision was seen as an effort to ensure reliability for the region.

California may not be the friendliest state to the natural gas industry. Several municipalities have banned the use of new natural gas hook ups, including Los Angeles. Santa Cruz, though, said the municipal utility is relying on natural gas more because coal deliveries also are falling short.

President Biden earlier this month averted a strike among railroad workers that could have put a stop to coal deliveries. Still, the strike was only one issue plaguing the railroad industry.

Santa Cruz said following the Covid-19 pandemic, Union Pacific and other railroad companies were forced to lay off workers. Many of the laid off employees never returned as the economy recovered. Now there aren’t enough engineers to drive the trains, he said.

“Despite the mines producing, it’s the railroad that can’t deliver the contractual volumes. We find ourselves unable to ramp those coal-fired units up as we normally would. So we make up that generation with natural gas.”

Wood Mackenzie notified clients of maintenance on Gas Transmission Northwest’s system between Dec. 6 and 8 that had the potential to impact up to around 300,000 MMBtu/d of volumes flowing through Kingsgate.

In the Permian Basin, pipeline work on El Paso Natural Gas and the Permian Highway Pipeline also cut into gas deliveries. Ironically, these curtailments have sent prices in that region plunging below zero.

“All these constraints, and the market is fighting for stagnant supply,” Santa Cruz said. “This is unprecedented.”