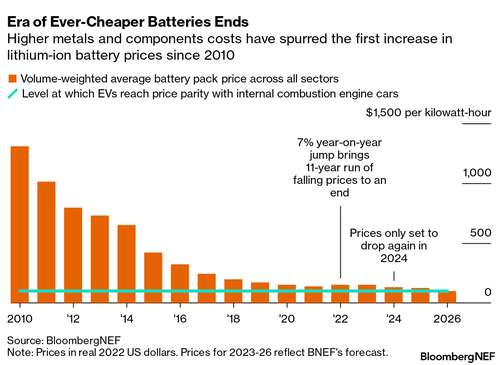 Lithium, a mineral used in batteries to power electric vehicles, smartphones, laptops, and all sorts of gadgets, has surged to a record high this year as the world pushes forward with a ‘green’ future. But in the process of decarbonizing the global economy, battery prices, for the first time since BloombergNEF began tracking the market in 2010, have risen on an annual basis.

After a decade of deflation, the volume-weighted average price of lithium-ion battery packs across all industries increased to $151 per kilowatt-hour in 2022, a 7% increase from last year. BloombergNEF forecasts prices could continue rising next year.

“Never before in the 12 years BNEF has surveyed battery prices have they recorded an annual increase, instead dropping sharply as production grew,” Bloomberg said. 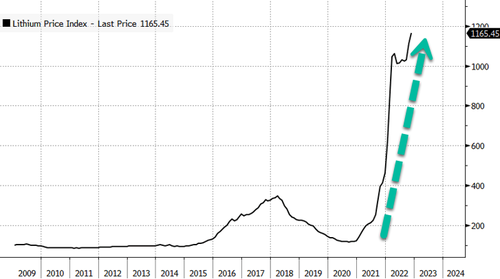 “Not until 2024, when more lithium production is expected to come online, are prices forecast to drop again,” Bloomberg explained.

The rise in lithium-ion battery packs could be the first red flags in the energy transition that prices to decarbonize economies will be costly.

“With the advent of electromobility and all this excitement about lithium, the world needs new sources,” Daniel Jimenez from consultancy iLiMarkets recently told the FT. “Whoever is producing lithium in the coming three years is going to make abnormally high margins.”