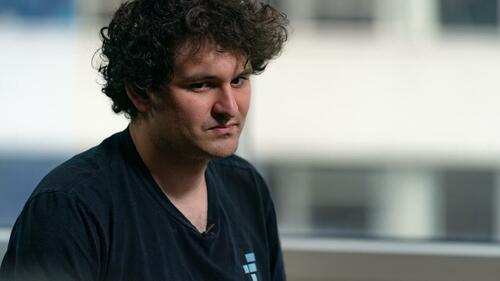 At least $73 million in political donations tied to Sam Bankman-Fried’s FTX , showered mostly on high-ranking Democratic politicians, may be at risk of being clawed back through the crypto empire’s bankruptcy, as lawyers search for assets to repay creditors.

Hilariously, Bloomberg attempts top frame the contributions as bipartisan and “wide-ranging,” despite Bankman-Fried, who’s never met President Biden, being heralded as “one of the people most responsible” for Biden’s 2020 win.

Is that why SBF is "one of the people most responsible for Biden being in office"? https://t.co/HYoude5zHr pic.twitter.com/hfs8LO94E3

SBF also donated to Democratic Rep. Ritchie Torres of New York, who just months ago was one of 8 members of Congress who lobbied against regulating crypto (and is now totally calling for an SEC investigation). 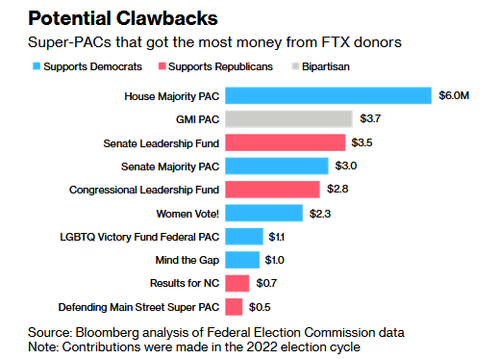 “Nobody ends up looking great in this,” says University of Rochester political science professor, David Primo.

While there’s precedent for forcing political entities to return contributions in cases of fraud, recovery prospects are unclear in FTX’s case. Recouping campaign funds as part of the bankruptcy proceedings is a complicated and lengthy process, and the scope of the total funds eligible for clawback depends on myriad federal and state laws. It is also subject to the bankruptcy lawyers’ judgment on what money, which may be long spent by the time the FTX trustees try to go after it, is worth the effort.

Bankman-Fried is facing additional scrutiny for recently saying he gave equally to Republicans and Democrats, but funded conservatives through  “dark money” groups that don’t identify donors. The claim is almost impossible to verify unless the recipients voluntarily disclose they received money from him. -Bloomberg

One factor noted in the debate over clawbacks is whether the bankruptcy court determines there was fraud or fraudulent intent involved in the collapse of FTX, according to Ilan Nieuchowicz, a litigator for law firm Carlton Fields. If that’s the case, nearly all donations tied to FTX could be a recovery target. If not, then only those made within the 90-day period prior to FTX’s insolvency, or around $8.1 million, would potentially be subject to recapture.

Some lawmakers are being proactive – with Michigan Democrat Debbie Stabenow announcing that she will donate $20,800 receive from SBF to a charity in her state. Republican Jophn Hoeven (see, bipartisan!), says he will give $11,600 received from SBF to the Salvation Army.

That said, donating the money to charity won’t necessarily keep the victims of fraud from attempting clawbacks – as the bankruptcy trustee could still ask that the donations made by those who received FTX money still return the funds.

Of the $73 million Bankman-Fried, Salame, Singh and FTX corporate entities donated, $45.5 million, or 63% of that total, went to their own personal super-PACs, including Bankman-Fried’s Protect Our Future and Salame’s American Dream Federal Action. Salame backed Republicans, while Bankman-Fried and Nishad largely supported Democrats.

Most of the money from those entities has already been spent, paid to a long list of vendors to support various office seekers. Bankman-Fried’s PAC only had $384,588 cash on hand as of late November, the last time the entity was required to publicly report its finances. -Bloomberg

Meanwhile, $26.6 million of FTX-linked contributions went directly to large super PACs, including those who gave money to House and Senate leadership of both parties (and of course, the proportion isn’t mentioned).

“It’s a lot easier to return a symbolic $1,000 contribution than it is $1 million to a super PAC,” said Charles Spies, who practices political law at Dickinson Wright.

This wouldn’t be the first time campaign donations were clawed back by bankruptcy trustees. In 2011, a district court judge ordered five party committees – including the DNC and its Republican counterpart, to return $1.6 million in donations from Allen Stanford, one of his top lieutenants, and his Stanford Financial Group, made between 2000 and 2008, before his Ponzi scheme collapsed in 2009.

According to attorney Kevin Sadler, “With contributions in the millions, the trustee has to pursue it.”