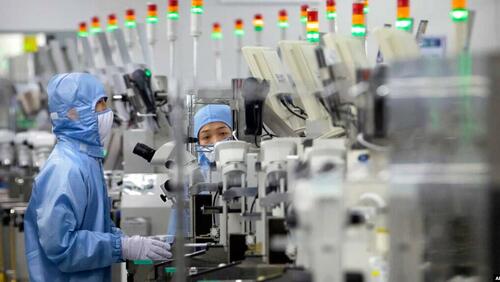 In a move that is sure to set Sino-Japanese relations several years back, on Monday morning Japan and the Netherlands agreed “in principle” to join the US in tightening controls over the export of advanced chipmaking machinery to China, Bloomberg reported cited according people familiar with the matter, in what is the latest “potentially debilitating blow to Beijing’s technology ambitions.”

The news follows a report from Japan’s Kyodo according to which, the US had “asked the Japanese government for cooperation in stymieing China’s efforts to develop high-end semiconductors.” The request, noting that the countries are allies sharing strategies against China, was made by U.S. Commerce Secretary Gina Raimondo during her phone conversation with Japanese industry minister Yasutoshi Nishimura on Friday, according to the sources.

The request made to Nishimura was the first ministerial one from the United States on the issue. Washington’s push to create a multilateral regulatory framework comes amid concerns that there will be loopholes in its export controls if Japan and the Netherlands continue to provide China with devices essential to manufacture advanced chips. It comes after the United States unveiled a sweeping set of export controls on certain high-end chips that could be used by Beijing to train artificial intelligence systems and power advanced applications in the military and surveillance fields.

Last week, Bloomberg News reported that Dutch officials were planning new export controls on China. The Japanese government agreed to similar restrictions in recent weeks since the two countries wanted to act in concert. Japan had to overcome opposition from domestic companies that would prefer not to lose sales into China, sources said. Besides Tokyo Electron, Nikon and Canon are minor players in the market.

In response to the back-door US pressure, Japan and the Netherlands are likely to announce in the coming weeks that they’ll adopt at least some of the sweeping measures the US rolled out in October to restrict the sale of advanced semiconductor manufacturing equipment, according to the people, who asked not to be named because they are not authorized to speak publicly on the matter. The Biden administration has said the measures are aimed at preventing Beijing’s military from obtaining advanced semiconductors.

The three-country alliance – if it comes to pass – would represent a near-total blockade of China’s ability to buy the equipment necessary to make leading-edge chips, according to Bloomberg. The US rules restricted the supply from American gear suppliers Applied Materials Inc., Lam Research Corp. and KLA Corp. Japan’s Tokyo Electron Ltd. and Dutch lithography specialist ASML Holding NV are the two other critical suppliers that the US needed to make the sanctions effective, making their governments’ adoption of the export curbs a significant milestone.

“There’s no way China can build a leading-edge industry on their own. No chance,” said Sanford C. Bernstein analyst Stacy Rasgon.

The three countries are the world’s top sources of machinery and expertise needed to make advanced semiconductors. ASML shares added to losses in Amsterdam on the news and were down 2.2%, in late Monday trading.

Senior US National Security Council official Tarun Chhabra and Under Secretary of Commerce for Industry and Security Alan Estevez were in the Netherlands late November to discuss export controls, Bloomberg reported, while Commerce Secretary Gina Raimondo talked about the same issues with METI chief Yasutoshi Nishimura via teleconference last week.

With the move, Dutch and Japanese officials will essentially codify and expand their existing export control measures to further restrict China’s access to cutting-edge chip technologies.  The two governments are planning to impose a ban on the sale of machinery capable of fabricating 14-nanometer or more advanced chips to China, Bloomberg sources said. The measures align with some rules Washington set out in October.

The 14nm technology is at least three generations behind the latest advances available on the market, but it is already the second-best technology that China’s chipmaking champion Semiconductor Manufacturing International Corp. owns.