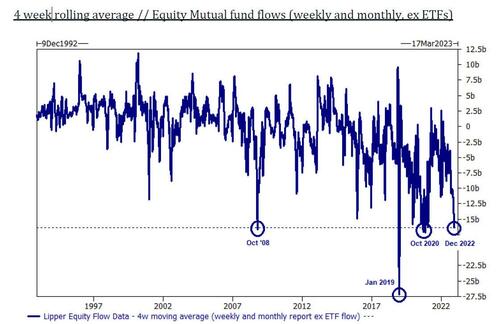 When looking at recent Lipper fund flows Data, superstar Goldman trader Brian Garrett writes that equity mutual funds have realized outflows for 26 consecutive weeks (-$254BN outflow) and 39 out of the last 40 weeks (-$333BN outflow). The pace of outflows has increased into year-end, with the current 4 week moving average at levels seen only a handful of times in the last 30 years.

Garrett calculates that on average, there were -$16.5BN of equity outflows every week for the last month (-$65bn in total) a pace which is rivaled only by Oct 2008 (financial crisis), Dec 2018 (trade wars + fed hike into slowing economy leading to worst December since 1931), and Oct 2020 (Trump/Biden election).

And speaking of retail bearishness, client flow expert Vanda Research notes that retail bearishness this week represented a continuation of three weeks of declining buying activity (chart below), and notes that “after serving as the driving force behind equity gyrations since the start of the summer, individual investors have pulled back notably since the end of November.” 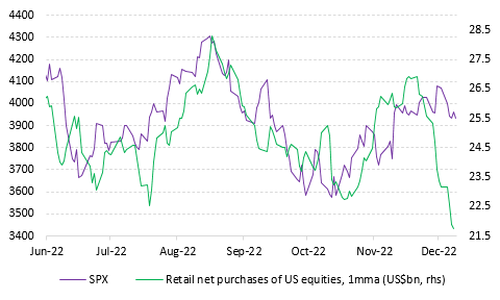 To be sure, this pullback is unlikely a secular sentiment change, but merely calendar driven: retail investors have historically engaged in a fair amount of tax loss selling towards the end of the past years, and primarily in single name equities. 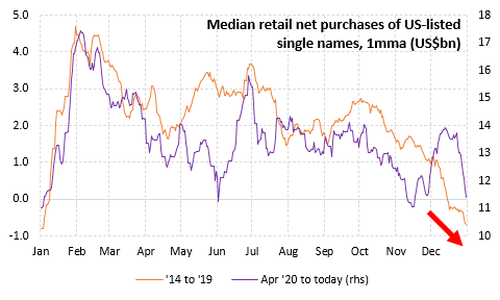 If this was indeed tax-loss selling, the proceeds of these sales would immediately be rolled into some other equity asset in order to maintain one’s market exposure. That’s what retail investors have traditionally done, gobbling up ETFs in the final month of the year… 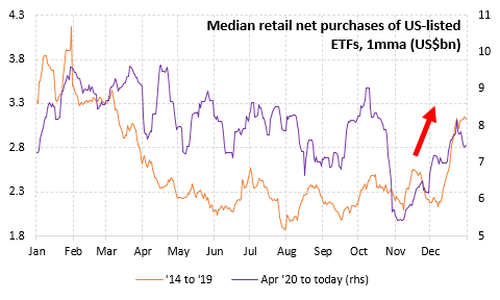 … except this year they haven’t. Whether this recent lack of rotational activity is related to FTX’s implosion, a softening job market or something else, I’m frankly not entirely sure. But it was clearly felt this week, as Vanda’s head of research Eric Liu writes. 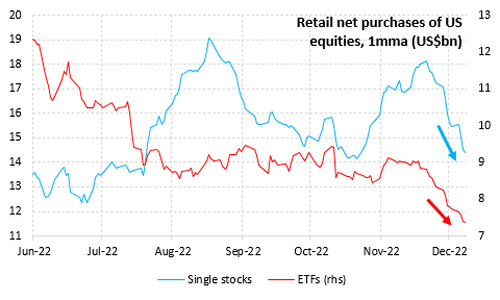 That said, such liquidation freak outs have historically marked inflection points: as Goldman’s Garrett notes, “historically stocks have traded higher in the months following outflows of this magnitude.”

Vanda agrees: as Liu writes, “this retail soft capitulation is a healthy development for markets. Retail positioning in US equities now sits near its low point for the year, and is rapidly approaching the -1.0 SD level (first chart below). So while we haven’t quite seen all of the trademarks of some of the quintessential capitulations of the past decade – à la December ’18 (second chart below) – the current positioning picture is about as attractive as it’s been all year.” 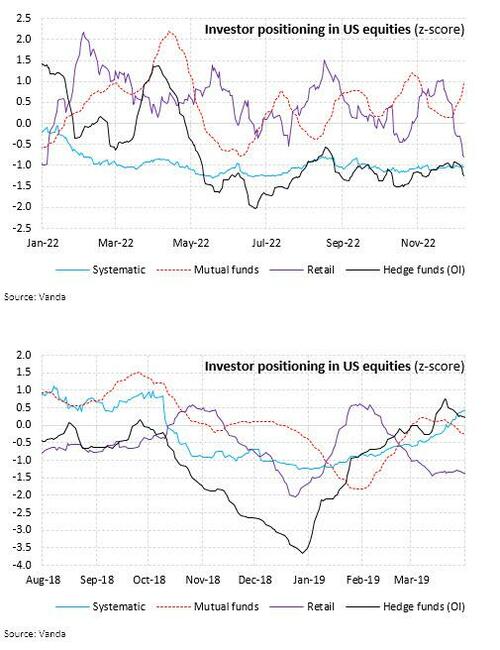 What happens next? With retail out on a buyer’s strike, the key to the next leg higher in US equities is the fast money community. Hedge fund and systematic investors have been sitting on low levels of exposure for most of the past seven months. What could change this stance? Well, according to Vanda, the most likely “change” is the simple passage of time:

Let’s assume, for the sake of argument, that both of next week’s big events (CPI and FOMC) end up being supportive for risk assets. Is that going to be enough to entice equity PMs to put on a ton of risk with seven trading days left before the holidays? Probably not.

But 1Q23 is a different story. An analysis of seasonal fluctuations in hedge funds’ US equity positioning indicates that the largest bullish buildups typically occur during the first three months of the year (chart below). Call it the clean-slate effect. 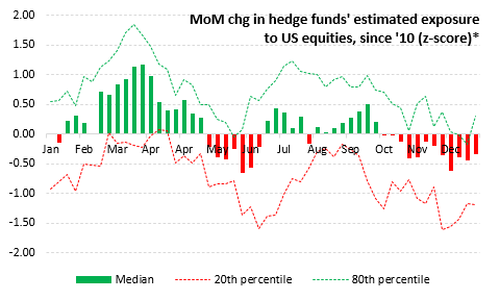 The passage of time should also bring CTAs back into the equity market – and sooner rather than later. For the first time since the Fed deliberately killed the risk rally back in August, US equity index levels are on the cusp of breaching a number of major CTA buy signals. In fact, were markets to simply stabilize around current levels, a number of these signals would be triggered by the beginning of January. 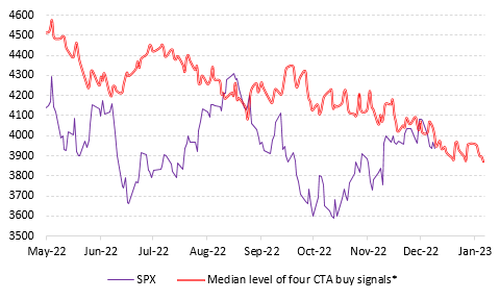 And here, one big caveat: for all of the above to happen, Vanda warned that “this week needs to be at the very worst uneventful.” The good news for the bulls is that at least the CPI has so far been favorable to risk, even if the post-kneejerk reaction has been to sell the news ahead of tomorrow’s FOMC. Still, as Vanda pointed out earlier, while fast money may be gone for the year, they will have no choice but to jump back in some time in Q1, especially since it is now consensus that stocks will trough some time in the first half before resuming their ascent into the end of the year.