With 50% Of Energy Facilities Destroyed, Ukraine Urges West For $1BN In Winter Help 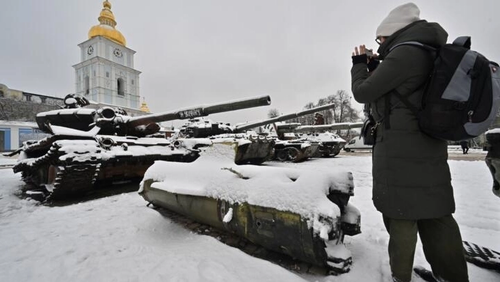 Ukraine now says that it has lost half of its energy system amid recent stepped-up Russian aerial attacks, which have continued to include suicide drones, some of which are believed supplied by Iran. President Volodymyr Zelensky communicated this in a Monday phone call with President Joe Biden, briefing the US leader on “the consequences of the Russian missile terror, as a result of which about 50% of the Ukrainian energy infrastructure was destroyed.”

In the mid-afternoon on Tuesday (local time), air raid alerts have reportedly been issued all across Ukraine, with sirens blaring in the capital after Zelensky warned that the next major wave of Russian airstrikes are imminent.

Starting Friday Kyiv authorities began revising their estimate upward from the 40% they had been estimating in statements as of weeks ago. Ukraine’s Prime Minister Denys Shmygal recently described, “Unfortunately, Russia continues missile strikes on Ukraine’s critical civilian infrastructure, fighting against the civilian population and depriving them of light, water, heat and communications during the winter… Nearly half of our energy system is disabled.”

The past month has witnessed some of the largest missile barrages targeting energy infrastructure to date, which has left whole cities, including Odesa and a number of cities in the south without power amid frigid temperatures.

Also on Monday Zelensky gave a virtual address before G7 leaders, wherein he urged more arms including “modern tanks” and “rocket artillery and more long-range missiles” while acknowledging his military is running low in the face of the more superior-armed Russian forces. He asked G7 nations for “about 2 billion cubic meters” of additional gas to help the population get through winter.

Among the more interesting things he said was that Moscow must withdraw all forces by Christmas. “The occupier must leave. It will certainly happen. I see no reason why Russia should not do it now – at Christmas.” Vowing the the counteroffensive will not stop even as the ground freezes, he appealed for Russia to avoid “further confrontation with the world.”

“Very soon we’ll have holidays celebrated by billions of people. Christmas – according to the Gregorian calendar or the New Year and Christmas – according to the Julian calendar. This is the time for normal people to think about peace, not aggression. I suggest Russia to at least try to prove that it is capable of abandoning the aggression. It would be right to start the withdrawal of Russian troops from the internationally recognized territory of Ukraine this Christmas. If Russia withdraws its troops from Ukraine, it will ensure a lasting cessation of hostilities,” the President said, speaking at the G7 Summit.

“Of course it is a very high amount, but the cost is less than the cost of a potential blackout,” Zelensky said via video link. “I hope that decisions will be made accordingly.”

“Because of the destruction of our power plants by terror attacks we will need to use more gas this winter than expected,” he described. Zelensky’s wife Olena had traveled to be at the Paris conference in person. As for his appeal for Russia to exit Ukraine by Christmas, this is unlikely to happen given especially President Putin just warned his own citizens to settle in for a “long” campaign in order to achieve Moscow’s military objectives.