A Stunned Wall Street Reacts To The Unexpectedly Hawkish Fed 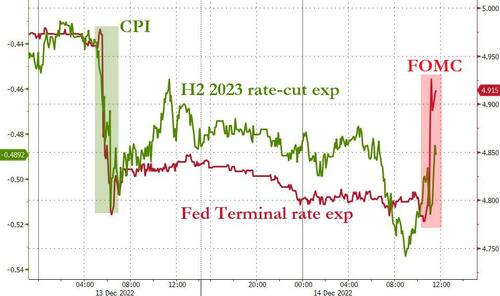 As the first kneejerk reactions to the final Fed statement of 2022 come in, the consensus is clear: after the recent Brookings comments from Powell and yesterday’s CPI miss, few expected the Fed to come out as guns blazing hawkish, as it did, despite shaving off 25bps from it recent 75bps rate hikes (largely the result of the sharp easing in financial conditions over the past two months which the Fed is clearly unhappy with).

Which put together sent the USD higher, while bonds, stocks, and gold all fell in price… 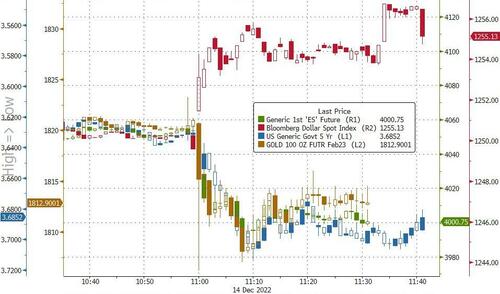 Below are some of the reactions we have gathered so far. We will update this as more come in:

“A Hawkish Fed. The FOMC Statement statement is notable for how little it has changed from the prior meeting. This remains a hawkish Fed.”

“As close to a recession call from the Fed as I can ever recall from SEP forecasts while holding rates at multi-decade highs, this is a Fed that wants to make sure the inflation job is done and won’t relent that quickly. The selloff in Treasuries is a market realizing they were in the wrong Zip code on expectations — they are hiking and market still wasn’t taking it serious. The clustering of dots for 2023 above 5%, with only two below that level, shows an FOMC on the same page to get the job done. They are going until something breaks in the economy, markets or both to get at aggregate demand and reduce wages and cut off the potential for a wage-price spiral, they are not taking chances.”

“Hawkish revisions to the inflation forecast with a majority of FOMC participants seeing core PCE decelerating to 3.5% at the end of 2023, versus a projection of 3.1% in the September forecast round.”

“Using a very approximate fair value calculation for 2-year yields, with a 50bp hike in February and a final 25 bp hike in March, and a 25 bp cut in March 2024 followed by an aggregate 75 bp in additional cuts over H2 ‘24 (meshing with the dotplot), we see 2s as ‘fair’ at 4.69%. Certainly not precise, but context for how far the rally in the front end had run ahead of the meeting.”

“The inflation forecast was upgraded for 2023-24, so any good news on the inflation front ahead could cause policymakers to hike by less than shown in these projections.”

“The hawkish statement takes back some of Powell’s perceived dovishness at his recent speech. This was not surprising to us, and we think it suggests the recent steepening of the yield curve could once again head toward new cycle lows before the end of hikes. However, I think the market will be cautious before the press conference, where in recent quarters the rates market has seen the bulk of its Fed-meeting-day moves.”