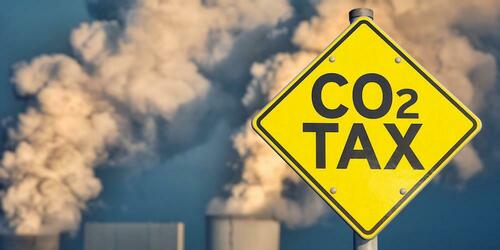 The European Union’s path to decarbonization might soon include a carbon dioxide emissions tariff on imported goods from countries considered climate abusers, which will attempt to upend global trade towards a ‘greener’ future.

After all-night negotiations, EU governments and the European Parliament struck a deal on key parts of the “Carbon Border Adjustment Mechanism” (CBAM) that is set to be phased in by the second half of 2023. The new measure will be the first of its kind, imposing CO2 emissions taxes on imports such as cement, steel, aluminum fertilizers, electricity production, and hydrogen.

CBAM intends to protect Europe’s domestic manufacturing industry from competitors in countries that have yet to regulate carbon-dioxide emissions and will attempt to force countries to set prices on carbon — either through a tax or by a cap-and-trade system.

“CBAM will be a crucial pillar of European climate policies. It is one of the only mechanisms we have to incentivise our trading partners to decarbonize their manufacturing industry.” Mohammed Chahim, European Parliament’s lead negotiator on the law, said in a statement.

Currently, the EU provides free CO2 permits for domestic industries to safeguard them from foreign companies, but that will be phased out once the carbon border tariff kicks in next year.

Brussels said some countries could be exempted from the carbon border tariff if they have matching green policies to the EU. It was suggested that the US could sidestep the tax.

Pascal Canfin, chair of the EU Parliament’s environment committee, told reporters, “Of course, CBAM will have an impact on our trade partners because it’s designed to … It’s important that the EU leads on the connection between climate and trade policies.”

The preliminary agreement among the EU negotiators will need the endorsement of ministers and the entire parliament before enforcement.

The carbon border tariff is just another tax by the government under the guise of saving the planet from climate change. Has anyone told these politicians the climate has been changing for millions of years? Somehow the EU believes slashing emissions by 55% in the next seven years will save the world.

And the tariff will likely have criticism from countries, including China, one of Europe’s top trading partners…