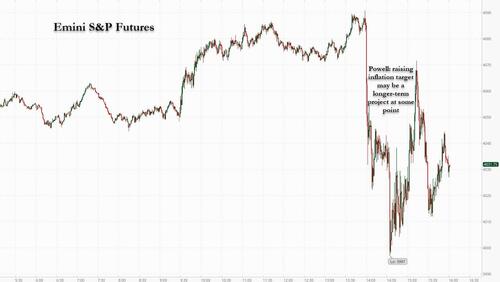 While Powell showered the market with trite platitudes, eager to convince the market that the market is wrong in expecting the Fed to not only push the economy into a recession, but to end 2023 with a 5.1% rate (the market-implied rate is 4.36%, more than 70bps below the Fed’s forecast anticipating at least one rate cut from the current level), the most important exchange at the Powell press conference took place when someone asked the central banker if the Fed’s 2% inflation target would be changed (a topic of great significance, and one which we have covered extensively here, here and here).

So what did Powell respond? Well, at first blush, nothing one didn’t expect and certainly nothing that could have crushed the Fed’s credibility in a millisecond (because that’s precisely what raising the inflation target from 2% to 3% will do, not to mention pushing gold from $1800 to $10,000 and bitcoin limit up). Indeed, the word salad out of Powell’s mouth was best summarized by the Fed chair’s own mouthpiece, WSJ’s Nick Timiraos: “Powell on changing the Fed’s 2% inflation target: “We’re not going to consider that under any circumstances.”

Powell on changing the Fed's 2% inflation target: "We're not going to consider that under any circumstances."

Only that’s not what Powell said: yes, he hemmed and hewed, and did say that we are not going to consider that under any circumstances now… but then quietly added that “it may be a longer-run project at some point.”

Bingo: because that vague advance signaling is precisely what we said half a year ago would happen sooner rather than later…

At some point Fed will concede it has no control over supply. That's when we will start getting leaks of raising the inflation target

… and while nobody would expect Powell to even dare breach this topic when inflation is 7% and unemployment is near record lows, let’s see what happens when inflation remains stubbornly around 4% and the unemployment rate starts to surge: how long until “someinflation target  point” becomes “right now.”

While the timing nuance may have been lost on the WSJ Fed mouthpiece who is mostly qualified to repeat only what he is fed, others did not miss the critical distinction, to wit:

Neil Dutta at Renaissance Macro said: “Powell even saying that there could be a “longer-run project” in looking at the inflation target is “dovish.”

David Wilcox at Bloomberg Economics added : “At the presser, Powell slaps down any notion of rethinking the 2% inflation target any time in the foreseeable future. Implicitly, he leaves open the possibility of revisiting the target down the road — perhaps at the next ‘framework review’ due to be concluded in about 2025, or perhaps the one after that. In other words, not until WAY down the road.”

And finally, Axel Merk with what may be the best take: “Powell opens the door to a higher inflation target “as part of a longer term project” — that’s poor communication: if you are willing to change the inflection target, you signal it can be changed more than once. This irresponsible talk risks unanchoring inflation expectations.“

Powell opens the door to a higher inflation target “as part of a longer term project” — that’s poor communication: if you are willing to change the inflection target, you signal it can be changed more than once. This irresponsible talk risks unanchoring inflation expectations

Not surprisingly, it was moments after Powell’s concession, that the TICK hit a HOD of 1632 and the S&P briefly erased all losses.

And now that Powell’s “poor communication” is in the open, expect every politician facing discontent among their unemployed electorate  – staring with such socialist central planners as Liz Warren – to launch a full-court press on this final, and most critical of Fed credibility anchors which will culminate with the loss of any credibiltiy the Fed may have left…  although after 2020’s corporate bond purchases and 2021’s “transitory inflation” episode, why anyone would even claim the Fed has any credibility left is a mystery.