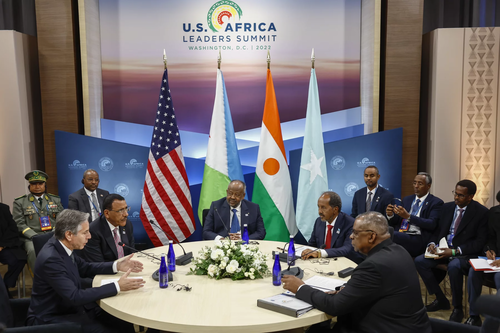 The White House starting Tuesday is hosting leaders from across the African continent for a three day US-African partnership summit, and while national security official John Kirby has stressed in interviews with regional media that it’s not about an “us or them” ultimatum when it comes to Russia and China’s expanding influence in Africa, so far that’s precisely the message on the first day…

US Defense Secretary Lloyd Austin has warned African leaders at a summit that Russia risked “destabilizing” the continent with their rising involvement.

Speaking at the start of a three-day US-Africa summit, Austin said that Russia is “continuing to peddle cheap weapons” and deploying “mercenaries across the continent.”

The Ukraine crisis is looming large at the summit which includes participation the leaders of 49 African nations. Many of these are fearful and frustrated over their countries and populations paying the economic price for the conflict taking place in the “world’s breadbasket”.

Much of the Ukrainian wheat which had for many months throughout the first half of the war been blocked from traversing the Black Sea goes to Africa, as well as the Middle East.

Among key developments which the Biden administration previewed going into the Washington-hosted summit is the expected announcement of a pledged $55 billion in Africa-related initiatives over the next three years.

“Working closely with Congress, the US will commit $55bn to Africa over the course of the next three years,” US national security advisor Jake Sullivan said Monday.

Biden is also expected to highlight a push for the African Union to join the Group of 20 as a permanent member, as well as for an African seat at the United Nations Security Council (UNSC).

After the first day of the summit one regional analysis site said that the White House focus will continue to be wooing African nations away from the allure of Moscow:

However, far from being purely diplomatic in a two-way sense, US efforts to improve its relations with Africa have second motivations: to distance the continent from Moscow’s political, economic and commercial influence – in the context of the war in Ukraine – and to counterbalance China’s economic presence in the continent.

The mobilization of much of the West in defence of Ukraine has been one of the White House’s greatest achievements during Biden’s tenure, but some of the African countries that see themselves as most affected by the supply disruptions – being deeply dependent on imports of Russian and Ukrainian grain and cereals – have placed themselves in the bloc of nations that refuse to condemn the Russian attack, claiming that there is “little benefit in angering Moscow”. This is despite the African Union’s official position condemning the invasion.

On the other flank of the US on Africa is China’s growing influence. On the basis of the “China-Africa Cooperation” forum – held every three years since the turn of the millennium -, Beijing’s support for liberation movements against colonial rule, and China’s huge commercial and economic investment in the “New Silk Road” (or “Belt and Road”) project, the Asian giant is the continent’s largest trading partner. This is something that works in both directions, and that last year 2021 exceeded 254 billion dollars. Four times the trade between the United States and Africa.

Austin on Tuesday told African leaders that China is expanding its footprint “on a daily basis”. He said of their growing economic influence: “The troubling piece there is they’re not always transparent in terms of what they’re doing and that creates problems that will be eventually destabilizing, if they’re not already.”

Biden is planning a multi-country trip to Africa next year, with an announcement expected to be made at this week’s U.S.-Africa summit, ⁦@DavidLawler10⁩ & ⁦@HansNichols⁩ scoop
https://t.co/GKpTWqFDge

This week’s major summit is only the second such that the United States has hosted in last eight years, after the Obama administration initiated the first US-African partnership summit in 2014.

Seeking to underscore the US commitment to Africa, US officials have hinted at a potential Biden trip to the continent in 2023; however, as Axios noted of the potential careful planning ahead of such a trip: “Any presidential trip to Africa will set off jockeying among countries, looking to host a high-level guest as a validation of their policies and a signal to investors.”