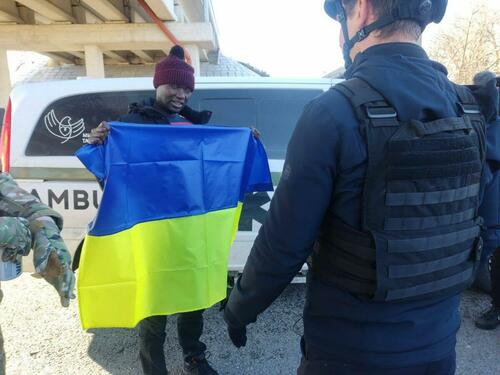 The Ukrainian government on Wednesday announced the completion of a major prisoner swap with Russia which included an American citizen.

The swap resulted in the release of 64 Ukrainians and one US citizen, according to official statements. “64 soldiers of the Ukrainian Armed Forces who fought in the Donetsk and Luhansk sectors are going home,” chief of staff to the Ukrainian presidency, Andriy Yermak, said in a tweet.

The statement identified the freed American by name: “It was also possible to free a U.S. citizen who helped our people — Suedi Murekezi” – who is reportedly a Rawandan-born American that was working in a nightclub in Kherson city at the time the war started.

In a media interview immediately after his release, Murekezi described a situation wherein he became trapped in a war zone without a passport. He further says that he was tortured and accused of being a CIA agent:

A two-hour ceasefire was agreed to in the area, starting at midday local time, so that a swap involving dozens of prisoners of war could go ahead. Murekezi was brought out of Russian-controlled territory as part of that exchange.

The Washington Post has identified Murekezi as a US Air Force veteran. He had reportedly been detained in southern Ukraine at some point during the summer.

“A U.S. Air Force veteran captured by Russian forces in Ukraine earlier this year, has been released from occupied territory as a part of a prisoner swap between Moscow and Kyiv, a senior Ukrainian official and Murekezi’s family said Wednesday,” the Post reports.

There’s speculation over whether or not he was fighting with volunteer forces on behalf of Ukraine, given Ukrainian officials have been quick to “thank” him for “helping” Ukraine, as the statement from Zelensky’s office did. Murekezi’s family has denied that he was involved in the war or protests in any way.

Another POWs swap. 64 soldiers of the Armed Forces of Ukraine, who fought in the Donetsk and Luhansk areas, are going home.

Also, we managed to free a US citizen who helped our people – Suedi Murekezi. And we got home bodies of four KIAs. pic.twitter.com/qKqbGpwV6x

Russian state media has suggested Murekezi was arrested for attending “anti-Russian” protests in the Donbass:

Russia’s state-run TASS news agency reported that Murekezi was arrested in the eastern Donetsk region of Ukraine in June and charged with attending anti-Russian protests and inciting “ethnic hatred.”