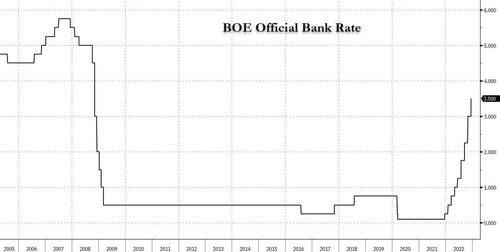 Following in the Fed’s footsteps, moments ago the Bank of England raised interest rates by the expected 50bps, the ninth increase in a row to a 14-year high of 3.5%, pressing ahead with efforts to tame sky-high inflation even as the UK officially slides into recession.

Remarkably, the MPC was even more divided than its last decision, and was split three-ways: 2 calls for no change (rate hikes done/pause), 1 for 75bps and 6 for 50bps; Specifically, Tenreyro and Dhingra voted for unchanged, saying the current setting of Bank Rate was more than sufficient to bring inflation back to target, before falling below target in the medium term; on the other end, Mann voted for -75bps: said although there was some evidence of an inflection point in CPI inflation, there was greater evidence that price and wage pressures would stay strong for longer than had been projected in the November Report: pulling forward monetary’ action now would reduce the risk that Bank Rate would need to rise well into next year even as the economy slowed further. Or as Vanda’s Viraj Patel notes, “it’s telling of where UK economy is – there’s a case for 0 or 75bps. Nuts. Key thing next year is timing/depth of recession. One group on the MPC will be wrong”

If the Bank of England had a dot plot… 🤓$GBP pic.twitter.com/gjBbiCyY6D

“The majority of the committee judged that, should the economy evolve broadly in line with the November Monetary Policy Report Projections, further increases in bank rate may be required,” Bailey wrote in a letter to Chancellor of the Exchequer Jeremy Hunt.

Hunt appeared to take pressure off the BOE to raise rates in his first exchange of letters with the governor since he became chancellor, according to Bloomberg. His predecessors had urged the bank to act “forcefully” against rising inflation — an implicit direction that the government was watching the committee closely. Hunt dropped that language, but of course none of that matters since central banks are supposedly “independent” and don’t make decision based on what politicians want, wink wink.

“I know that the MPC will continue to take the action necessary,” Hunt wrote. The letters are triggered every quarter if inflation strays more than 1 percentage point away from the 2% target.

Bailey said inflation may already have peaked, but the risks around that projection are on the “upside” and price growth will remain very high in the next few months.

Minutes of the meeting said the majority said, “the labor market remained tight, and there had been evidence that inflationary pressures in domestic prices and wages that could indicate greater persistence and thus justified a further forceful monetary policy response,” minutes of the meeting released Thursday showed.

The panel dropped guidance that it issued in November, when it said the path for interest rates implied by financial markets was too aggressive and now says that “While the market-implied path was a little higher than the MaPS median, the gap between these measures had narrowed since the previous MaPS survey, conducted in mid-October “

The minutes said the “majority” of the panel now believe “further increases” in bank rate might be required — if the economy evolves in line with its November forecast. Separately, the Committee continues to judge that, if the outlook suggests more persistent inflationary pressures it will respond forcefully, as necessary.

More importantly, BOE officials estimate the UK is now in recession, thought the economy is slightly stronger than it anticipated in November. Gross domestic product in the fourth quarter probably will fall 0.1% following a decline of 0.5% in the third quarter, the BOE said.

The BOE also said that the government’s fiscal package released last month will support the economy next year but depress output in three year’s time. Separately, GDP will be 0.4% stronger at the end of 2023 than previously forecast, but it will be 0.5% weaker at the end of 2025, according to the central bank’s estimates.

The Treasury’s measures will have a small impact on inflation. But a 3,000 pound cap on energy bills from April will bring headline inflation down by 0.75 of a percentage point in the second quarter, the BOE said.

The BOE decision, which takes rates to their highest level since November 2008, came after the US Federal Reserve eased up its tightening plans with a half point rate hike on Wednesday, bringing its target range of 4.25% to 4.5%.  The Fed signaled that the US is now close to the terminal rate, which it estimates at just over 5%. Markets reckon UK rates need to reach about 4.75%.

With the BOE dealing with the highest level of inflation in four decades – most of which is purely supply-driven and which monetary policy has absolutely no impact on – there are signs that it is becoming embedded in wage-setting. That has led to the fastest monetary tightening cycle since the late 1989s. However, official figures this week suggested inflation is now past its peak.

The good news is that earlier this week, consumer prices fell from 11.1% in October to 10.7% in November and labor market participation improved, with 76,000 inactive people re-joining the workforce and vacancies falling. However, wages are rising at the fastest pace since in two decades outside the pandemic and inflation remains more than five times the BOE’s 2% target.

The BOE will publish a market notice at 6 p.m. Friday outlining the progress of gilt sales under its quantitative tightening program and the operational arrangements for the first quarter of 2023.

The bank said the pace of its gilt sales is running ahead of schedule, which “would permit an earlier unwind of the portfolio than initially anticipated.” The central bank reduced the stock of gilts in its portfolio by 44 billion pounds over 2022 as a whole, bringing government bonds in its Asset Purchase Portfolio to 831 billion pounds.

The lack of any notable surprises in the statement means that cable is roughly unchanged from where it was before the statement, trading just around 1.234 after a modest dip lower in the kneejerk move.