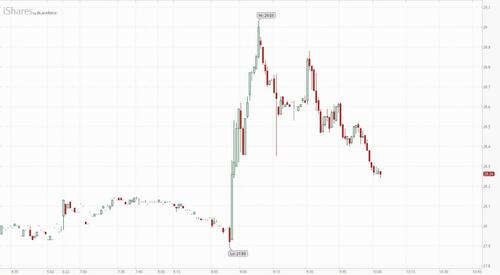 Chinese stocks traded in the US jumped on Thursday morning after US regulators said that they had been allowed to inspect the work of auditors in China for the first time, easing the threat that about 200 Chinese companies could be thrown off the US stock market.

According to the FT, the announcement is a significant breakthrough after a more than decade-long stand-off between Beijing and Washington, which has argued shoddy audit work contributed to a series of accounting frauds at US-listed Chinese companies.

Companies including Alibaba, JD.com and Baidu were on course to be delisted starting in 2024 under US legislation that bans trading in stocks whose auditors cannot be inspected by the Public Company Accounting Oversight Board.

China agreed in August to let the PCAOB examine work papers from Chinese auditors, including the local affiliates of the Big Four global accounting firms, but the agency had signaled it was sceptical they would receive unfettered access. Not anymore: the PCAOB was set up to inspect all the accounting firms that audit US companies, regardless of where they are based.

Although inspectors have not yet been allowed into mainland China, a team spent several weeks in Hong Kong examining audits conducted by the mainland affiliate of KPMG and the local affiliate of PwC.

Beijing had resisted US audit inspectors for years over fears they would gain access to sensitive data, including at state-owned companies. In the run-up to the August deal with the PCAOB, several politically charged companies, such as the oil producers PetroChina and Sinopec, abandoned their US listings.

Alibaba, JD.com and Pinduoduo were among the stocks that rallied on the news, while the FXI China large-cap ETF staged a bounce right before the open, only to be dragged lower however as risk tumbled following the hawkish ECB pivot which added to Fed tightening fears.