As we first reported yesterday, Wall Street has been quietly outraged by the internal inconsistencies in the latest Fed forecast (here Morgan Stanley was most vocal in slamming the Fed’s “Inconsistent”, Contradictory Message).

One reason for the sellside anguish is that the Fed is forecasting zero rate cuts throughout 2023 at a time when it expects unemployment to rise by almost 1%, or some 1.6 million job losses: a laughable prediction when one considers the screams of outrage from Democrat politicians once we get the first negative payrolls print.

Others, like Goldman trader Mike Cahill were confused by what the Fed was trying to achieve:

“Powell clearly doesn’t want to explicitly guide towards 25bp, but his comments clearly cut in that direction. His comparison to moving around in a dark room is the same analogy he used in the last cycle, and suggests overall that he thinks policy should move towards more ‘normal’ increments. He adds an important caveat that he wants to see financial conditions reflect the restrictive policy they’re trying to put in place. However, we disagree with his view that the pace of hikes is much less relevant than the level they’re trying to move to…. Powell also reiterated that the Fed believes there is still a lot of tightening ‘in the pipeline’ and policy is in restrictive territory now (just not quite ‘sufficiently restrictive’). That’s counter to the GS FCI framework, where we believe that the bulk of the negative impulse on growth is already behind us.”

And then there was simple math ineptitude: according to the Fed’s latest quarterly projections, Fed officials now expect core inflation to end this year around 4.8%, a sharp jump from the 4.5% figure they forecast in September.

The problem, as Bloomberg noted this morning, is that the Fed’s core PCE forecast looks much too high to Wall Street economists following the surprisingly soft CPI release on Tuesday, even though Chair Jerome Powell said it was reflected in the projections.

It’s an important question because, as BBG’s Matthew Boesler explains, Powell specifically cited the higher “jump-off” point for inflation this year as one reason for the surprising upgrade to where Fed officials see prices at the end of 2023. That outlook, in turn, led to a hefty upward revision to their projected path for interest rates. So the next two inflation reports will be make-or-break.

“To reach their 2022 forecast, implicitly they have extremely strong December numbers for inflation written in,” said Alan Detmeister, an economist at UBS Securities.

Actually we would take the under any day, and say there is virtually no chance core PCE closes out the year anywhere near 4.8%.

As a reminder, the Fed’s own projections — and its 2% target — don’t use CPI, instead they are framed in terms of the Commerce Department’s personal consumption expenditures price index, and November data for that won’t be published until Dec. 23 (the latest CPI report showed the core inflation rose just 0.2% last month, and continues to slow). Meanwhile, JPM economists estimate core PCE prices probably rose just 0.1% in November, based on the latest CPI as well as last week’s PPI report.

Indicatively, October core PCE prices rose 0.2%. Putting together the actual October number with the estimated November number leaves a December number that would have to buck the downtrend of recent months in a big way. If JPM is right, and the November core PCE increase is just 0.1%, December would require a 0.7% jump in core prices for the Fed to hit its 4.8% number for the year. Even a sizable 0.4% increase in December might translate to just 4.6% for the annual figure. More realistically, tracking the decline in core PCI, the Fed’s preferred inflation metric will likely slump to ~4.2% by the end of the year, badly missing the Fed’s revised forecast! 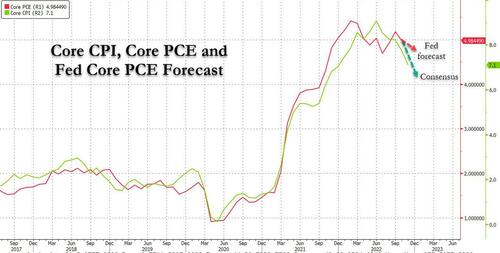 While no one knows what the December data — which won’t be published until the end of January — will show, “you need a real story” to get to those kinds of numbers, said Steven Englander, the head of global G10 FX research and North America strategy for Standard Chartered Bank. Furthermore, given the sharp slowdown in goods inflation as well as the modest easing in housing inflation which is just months away from decelerating and catching down to what is really happening in the rental and housing markets, “if Powell thought that that was going to happen, I think it would have been incumbent for him to say, don’t be misled because December’s going to be a whopper,” Englander said.

There is a simpler explanation: the Fed simply ignored the latest CPI report and based its forecast and dots on the recent “hot”data (including last week’s PPI which came in well above expectations). This means that the Fed refused to update its forecasts for the latest data!

That’s the theory of UBS economist Alan Detmeister, a 15 years Fed veteran, who said the November CPI report published on Tuesday — 90 minutes before the Fed began its two-day policy meeting this week — probably didn’t arrive in time for Fed officials to adjust their forecasts, despite Powell’s insistence that it did.

FOMC participants submit their quarterly summary of economic projections on the Friday before the Fed meeting when it will be released.

"Policymakers may revise their projections at any time until the evening of the first day of the meeting." https://t.co/XrfZrSrMgD

Only that pretty much never happens according to the 15-year Fed veteran:

“They very rarely do,” in part because that would also potentially necessitate revisions to projections for other things like interest rates and unemployment, Detmeister said. “Very few of them would have probably gone ahead and updated their submissions and really worked out what it would’ve taken in December to hit that target.”

This counters what Powell himself said; grilled during the presser about the inconsistency between the Fed’s core PCE forecast and where we currently are, Powell said that “It’s never the case” that the projections “don’t reflect an important piece of data that came in on the first day of the meeting.”

Except this time they do, and not only that but the Fed is also clearly ignoring what it’s won Philadelphia Fed had to say about job numbers in the March-June time period. As we discussed extensively yesterday, a new report by the Philly Fed (released on Dec 13, or hours after the FOMC meeting had already started), found that “In the aggregate, 10,500 net new jobs were added during the [March-June] period rather than the 1,121,500 jobs estimated by the sum of the states; the U.S. CES estimated net growth of 1,047,000 jobs for the period.“

Translation: the Fed was hiking not just 50bps but also 75bps in the late summer and early fall based on job numbers that were not in the mid 300Ks but were effectively flat! Putting it all together, we can now confidently say that for a Fed whose mandates are inflation and jobs – not the stock market, at least not officially – the Fed has failed on both of these mandates, ignoring critical updates on both the jobs market (which paint a far more dire picture of the US economy) as well as inflation (where the Fed’s core PCE forecast is predicated on stale numbers which ignore the latest data). And while it is only a matter of time before the Fed will have to concede just how behind the curve it is again (remember “transitory inflation”?), what we find most remarkable is how much faith the market still places in the Fed’s busted forecasts.