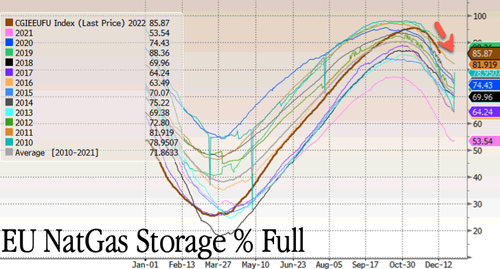 Western sanctions on Moscow have backfired, failed to paralyze Russia’s economy, and ultimately sparked financial pain for ordinary Europeans and the largest economy in the block.

According to Reuters calculations, Germany has hemorrhaged cash to the tune of 440 billion euros ($465 billion) in energy bailouts and schemes, as well as keeping energy supplies flowing while it lost access to inexpensive natural gas from its leading supplier Russia in 2022.

“How severe this crisis will be and how long it will last greatly depends on how the energy crisis will develop,” said Michael Groemling at the German Economic Institute (IW). He added: “The national economy as a whole is facing a huge loss of wealth.”

Reuters said the “cumulative scale” of energy bailouts and other schemes employed by Berlin equates to 1.5 billion euros per day since Russia invaded Ukraine, or about 12% of national economic output, or 5,400 euros for each German.

Germany has shown Europe how backfiring sanctions ruin its country’s finances and send millions of its citizens crashing into energy poverty overnight. These anti-Russian measures have caused soaring electricity and NatGas prices and elevated risks of entering a recession in 2023.

“The German economy is now in a very critical phase because the future of energy supply is more uncertain than ever.

“Where does the German economy stand? If we look at price inflation, it has a high fever,” said Stefan Kooths, vice president and research director of business cycles and growth at the Kiel Institute for the World Economy.

Many other European countries find themselves at the mercy of the weather as NatGas injections into EU storage facilities have flipped to draws amid a wicked cold spell boosting heating demand.

“The country has turned to the pricier spot, or cash, energy market to replace some of the lost Russian supplies, helping drive inflation into double-digits,” Reuters noted.

And due to the reliance on Russian NatGas, Germany has limited LNG infrastructure, which forced it to charter five floating storage and regasification units on the country’s north coast. The cost of chartering FSRUs is a whopping 9.7 billion euros. The first LNG vessel will arrive at the floating terminal this weekend.

The five FSRUs will only be able to cover about a third of Germany’s current NatGas demand — still unable to offset the supply deficit since Russian flows have been cut.

“I think Germany has been doing whatever it can,” said Giovanni Sgaravatti, research analyst at the Bruegel think-tank. He added, “In the LNG market, Germany had to start from scratch, which isn’t easy.”

The energy crisis in Europe is far from over, as winter weather is in full swing across the energy-stricken continent that has yet to offset lost supplies. Germany’s half-trillion-euro bazooka might not be enough as global LNG supplies are tight.