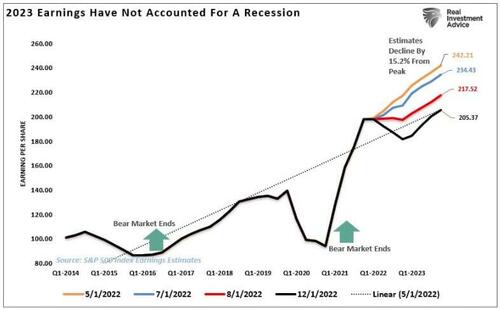 In 2023, the math of valuations suggests returns will likely be challenging as markets remain difficult to navigate.

Estimating price targets for the next full trading year is an exercise in futility. Too many variables, from politics to economics to monetary and fiscal policies, can impact market outcomes. However, we can build some ranges based on current valuations when estimating possible and probable returns for the following year.

As discussed previously, using FORWARD operating earnings for any analysis is flawed. The reason is that forward operating earnings today will not be at the same level in the future. Since May 2022, forward earnings estimates have declined by 15%. We suspect estimates will fall further, making forward valuation assumptions unreliable.

When analyzing historical valuations, a shift higher occurred as the Federal Reserve became active in monetary policy. The long-term historical median valuation from 1871 to 1980 is 15.04x earnings. When including 1980 to the present, that long-term media rose to 16.44x earnings. However, as the monetary and fiscal policies employed kept “mean-reverting” events from happening, valuations jumped to 23.38x earnings since 1980. 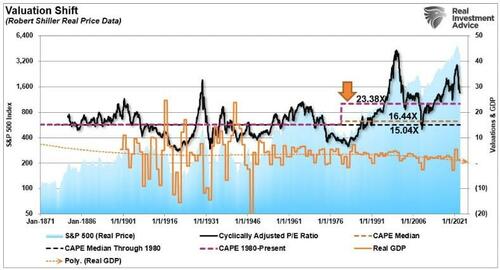 This analysis gives us three baselines for estimating next year’s potential return ranges. We will have to make several assumptions: 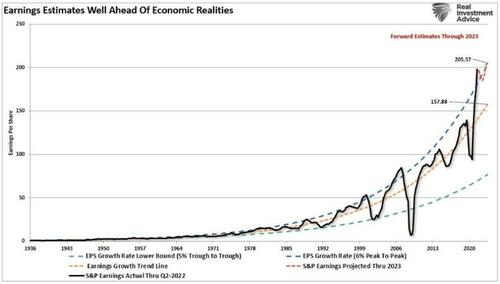 The problem with current forward estimates is that several factors must exist to sustain historically high earnings growth.

While such is possible, the probabilities are low, as strong economic growth can not exist in a low inflation and interest-rate environment.

However, with that said, we can use the current forward estimates, as shown above, to estimate both a recession and non-recession price target for the S&P 500 as we head into 2023.

In the NO-recession scenario, the assumption is that valuations will fall to 17x earnings over the next year. If such is the case, based on current estimates, then the S&P 500 should theoretically trade at roughly 3500. Given the market is trading at approximately 4000 (time of this writing), such would imply a 12.5% decline from current levels. 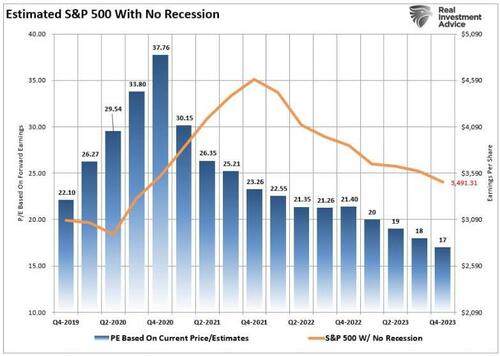 However, should the economy slip into a “soft landing” or mild recession and valuations revert to the longer-term median of 15x earnings, such would imply a level of 3100. 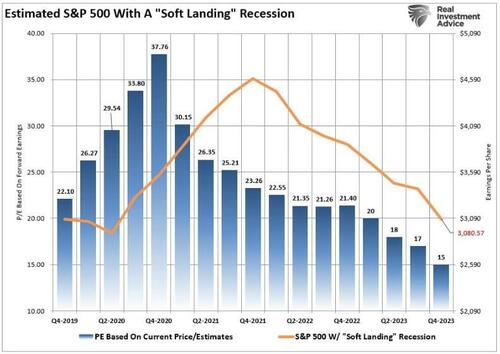 While an additional 22.5% decline from current levels seems hostile, such would align with typical recessionary bear markets throughout history. 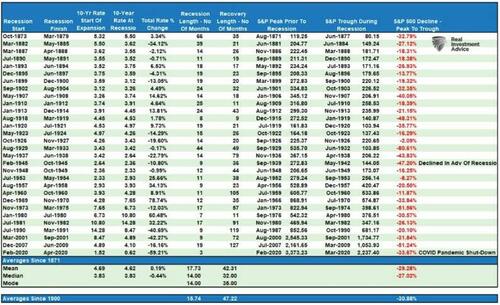 However, in a “deep recession” scenario, we expect a valuation and an earnings reversion (15x valuations on earnings of $160/share). Such would imply a price target of 2400 or a decline of roughly another 40% from current levels. 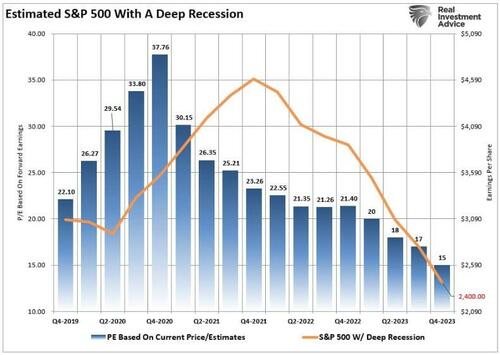 While such seems like an unduly large correction from current levels, there are previous precedents in history to suggest the possibility. Such would also align with the Federal Reserve “breaking something” in the credit markets, which impairs market functioning.

The chart below plots both paths for the S&P 500 for a better visual. 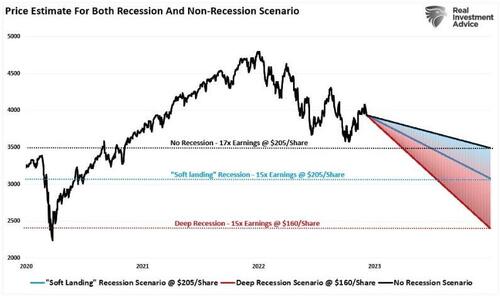 Optimistically, we saw the market’s lows in September, and a retest next year will bring valuations down to 17x earnings. Pessimistically, a recession will pull the market below the 2019 peak and revert valuations to 15x earnings, with earnings reverting towards historical growth trends.

Could There Be A Bullish Scenario? 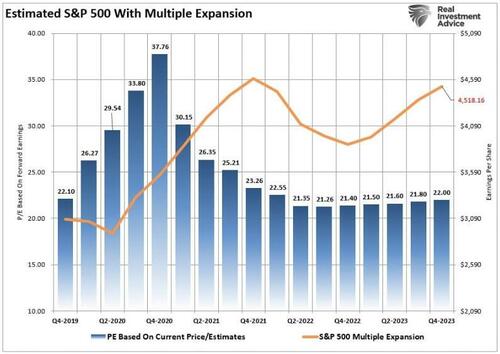 Adding the bullish scenario to our projection chart gives us a full range of options for 2023, which run the gamut from 4500 to 2400, depending on the various outcomes. 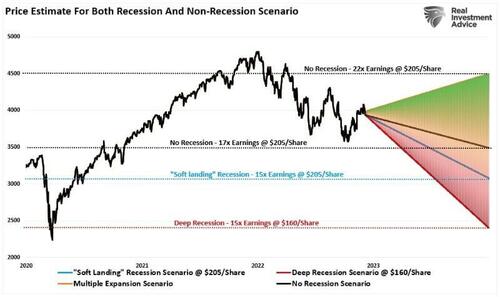 Here is our concern with the bullish scenario. It entirely depends on a “no recession” outcome, and the Fed must reverse its monetary tightening. The issue with that view is that IF the economy does indeed have a soft landing, there is no reason for the Federal Reserve to reverse reducing its balance sheet or lower interest rates.

While the bullish scenario is possible, that outcome faces many challenges in 2023, given the market already trades at fairly lofty valuations. Even in a “soft landing” environment, earnings should weaken, which makes current valuations at 22x earnings more challenging to sustain.

Is A Recession Inevitable?

While the “no recession” case is possible, we struggle with that view.

With the Federal Reserve committed to continued rate hikes in 2023, reducing market liquidity through Quantitative Tightening, and the consumer struggling to make ends meet, the risk of a recession seems quite elevated.

However, if employment remains strong, unemployment doesn’t rise, and wages continue to rise to offset inflation pressures, then it is possible to avoid a recession. The problem is that strong employment and wage growth will add to inflationary pressures. Of course, that is what the Federal Reserve is actively trying to resolve.

A recession seems highly probable if the Fed’s end game is higher unemployment and lower inflation through higher interest rates, which will ultimately slow wage growth. The economic data already seems well tilted into a recessionary trend. However, the composite economic index declines further during a recession, suggesting a deeper reversion in the stock market. 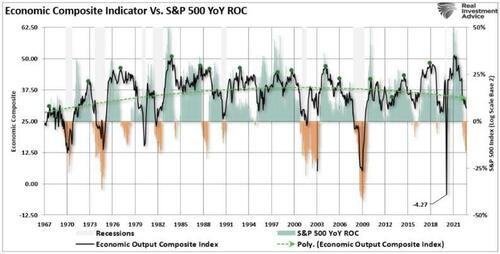 Given the Fed’s ongoing monetary tightening, the risks seem tilted toward weaker economic outcomes. However, as stated previously, the Fed will reverse course when something eventually breaks.

The bullish expectation is that when the Fed finally makes a “policy pivot,” such will end the bear market. While that expectation is not wrong, it may not occur as quickly as the bulls expect. Historically, when the Fed cuts interest rates, such is not the end of equity “bear markets,” but rather the beginning. Such is shown in the chart below of previous “Fed pivots.” 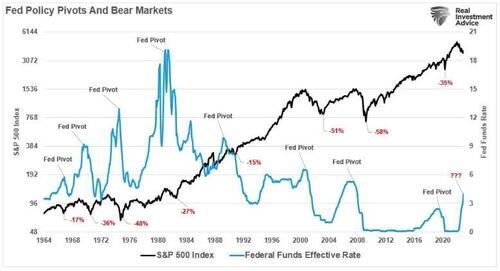 Our best guess is that reality lies somewhere in the middle. Yes, there is a bullish scenario where earnings decline, and a monetary policy reversal leads investors to pay more for lower earnings. But that outcome has a limited lifespan as valuations matter to long-term returns.

As investors, we should hope for lower valuations and prices, which gives us the best potential for long-term returns. Unfortunately, we don’t want the pain of getting there.

Regardless of which scenario plays out in real time, there is a substantial risk of poor returns over the next 12 months.

That is just the math.