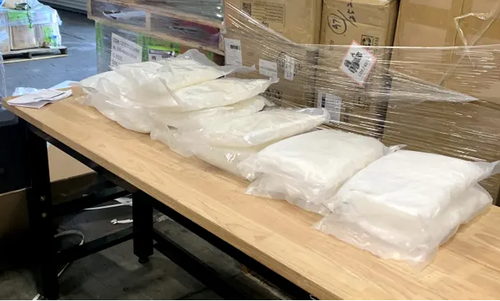 Two men accused of being senior members of an international crime syndicate have been charged in Taiwan over a plot to smuggle 30g (66 lbs) of methamphetamine into Western Australia inside of 3D printers.

On Saturday, authorities announced that two men, aged 33 and 36, were arrested in July and October of this year after the Australian federal police identified them as part of Operation Ironside – a sting between the AFP and US FBI in which they intercepted every single message posted via the AnOm encrypted communications platform for three years beginning in 2018, The Guardian reports.

AFP assistant commissioner Pryce Scanlan said one of the men came to the AFP’s attention after communications intercepted on An0m allegedly indicated he had coordinated more than 30 methamphetamine importations into Australia in 2020.

“Intelligence indicates he and his syndicate were attempting to import quantities of up to 100kg at a time,” said Scanlan. “We suspect they were operating long before we started monitoring them and were involved in multiple other drug trafficking plots targeting Australia.”

The plot was discovered by the AFP in partnership with the Australian Criminal Intelligence Commission (ACIC), who discovered the 3D printer plot.

The drugs were intercepted in the US before the reached Australia, while the Taiwan Criminal Investigation Bureau was able to arrest the 33-year-old suspect in late July in New Taipei City.

The 36-year-old, alleged to be the right-hand man of the first arrestee, was found in Taoyuan City, Taiwan and arrested in early October, according to the AFP. They have both been charged with illegal transportation of a category 2 narcotic and face life in prison if convicted in Taiwan.

“This organised crime group has caused significant harm to the Australian community for a number of years, as well as causing harm offshore,” said Scanlan, who added that the AFP is still investigating potential links to the crime syndicate over foiled imports into Western Australia.

“We allege this operation has taken out two senior members of a TSOC [transnational serious and organised crime] syndicate and disrupted their gateway to import illicit commodities into Australia, which is a significant win for the community.”

According to the AFP, the street value of the seized drugs was around $45 million.