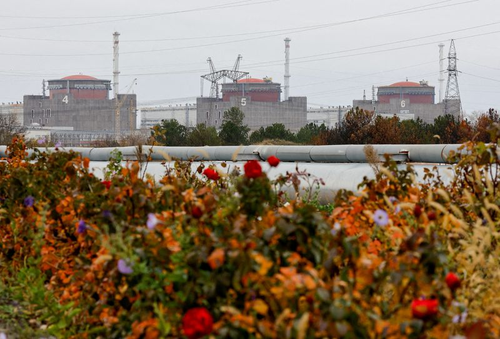 Russian state media has cited the words of a senior official in the Russian-backed administration of the Zaporizhzhia region, Vladimir Rogov, to report that Russian technicians are constructing a protective dome over spent radioactive fuel stores at the Zaporizhzhia nuclear power plant.

According to the Russian media reports, “The dome is designed to protect the storage facilities from shrapnel and improvised explosive devices carried by drones, the official explained, adding that it would be reinforced further at a later period.”

This as “Russia’s nuclear energy corporation Rosatom had earlier warned that damage to the spent-fuel containers risks a release of radioactive material into the atmosphere, with unpredictable consequences,” according to the reporting.

The Kremlin has for the past months accused Ukrainian forces of dangerous shelling and missile attacks on the facility, which remains Europe’s largest nuclear power plant.

But Ukrainian forces have instead said it is in reality Russian forces that are using the sensitive site as “nuclear blackmail”, and has more recently alleged Russia’s military is setting up missile batteries at the plant, escalating the situation further.

Both sides have accused the other of seeking to create a ‘false flag’ incident at the plant, which could involve nuclear radiation leaks.

The US and allies, as well as the International Atomic Energy Agency (IAEA), which has kept inspectors on location, have long been pushing to establish a ‘demilitarized’ zone around the plant.

Kremlin spokesman Dmitry Peskov said, “I want to remind you of the words of President Vladimir Putin: There hasn’t been – and aren’t – any heavy weapons at that power station. This can easily be confirmed by the IAEA staff who are there day and night.”

Already the plant, including power stations crucial to its safe operations, have been struck by shelling, also causing multiple power outages – resulting in the plant on multiple occasions having to enact its back-up safety measures.