The Principal Market Worry Is Shifting From Inflation To Recession 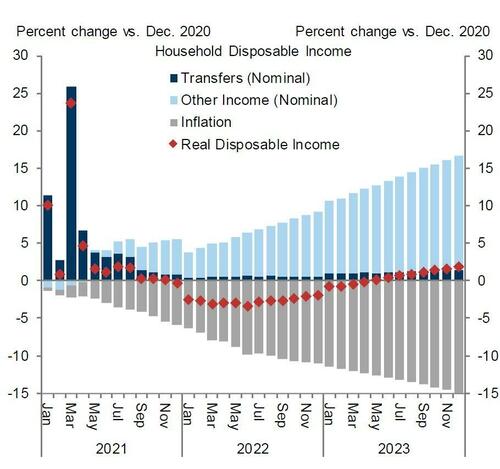 The core takeaways from the last major week of 2022 are clear: the underlying trend in US inflation has hooked lower and the Fed intends to incrementally dial things back, leaving expectations for the terminal rate just below 5% come June. Despite that “progress,” the past few days have featured some very messy price action, as the year 2022 refuses to go quietly into the night.

If you take a bigger step back, the overarching market narrative — said better, the principal macro worry — is shifting from inflation to recession. With that has come a series of immense reversals in the dollar and US interest rates, as further discussed in the first few points below.

For US equities, an ebbing of the inflation constraint is very significant; remember, as recently as late summer, it really wasn’t obvious that inflation was under control. That said, should the recession theme take on more weight, S&P is certainly NOT priced for a hard landing (here I’d again reference the volatility surface, cyclicals-vs-defensives or the simple PE multiple).

Taken together, I’m not enamored of risk/reward on US equities, from either direction … The sequence market behavior in recent weeks only underscores that instinct.

Therefore, as one is paid to wait in cash, I have no problem with the idea of sitting out a few hands and seeing how the cards come down in early Q1 — with more attention placed on the shifting dynamics in other macro assets and geographies. As always, I’m a taker of feedback and ideas.

What follows from here is a sequence of shorter points and charts that sacrifice depth and rigor for brevity and compression … by way of preface, they don’t point cohesively in one direction or another:

1. To be sure, there has been a very significant change in macro sentiment and positioning over the past month. In my travels, it appears the levered community is largely out of their dollar longs and out of their US front end shorts; those exits were well executed and are very clear in our most recent polling data (link for pro subs). To put a line under it, these mark a broad shift in discretionary conviction from the inflation theme to the slowdown/recession theme.

2. Where the trouble has come, as usual, is the bias to be short of S&P (witness price action on the immediate break of CPI … a sharp 3% squeeze forced the covering of some underwater shorts, only to see the market trade break hard thereafter). Here I’ll reference the wisdom of long-time colleague Dominic Wilson: into slowdowns, the first order is to buy bonds (over shorting stocks) … into recoveries, the first order is to buy stocks (over shorting bonds). This is an oversimplification, of course, and not necessarily where I think we’re headed, but it’s a maxim that would have spared lots of tactical pain in past cycles (including the past month).

3. Part of my aforementioned lack of excitement to engage risky assets is a nagging frustration that, despite all the travails of 2022, we don’t exit the year with a lot of risk premia to harvest in early 2023. For example, as pointed out by a client, the interest rate-hedged ETF for IG credit (ticker LQDH) is only down modestly on the year. N/B: while I still don’t really see the overwhelming draw of corporate credit at current levels of spread, I will concede that it likely outperforms equities in a bucket of risky assets.

4. As a more general point: after three years of spectacular action and some very powerful macro trends, I wonder if next year winds up feeling a bit anti-climactic for the speculative crowd … Not boring per se, just less fertile with regard to the opportunity set. I say this while noting a lot of muscle has been built back up in the macro space over the course of this year, which could make for some itchiness come Q1.

5. US financial conditions are easier today than they were coming out of the 4th quarter of 2018. When everyone is breathing easier on the trajectory of inflation, it feels a little pointless for me to that note headline CPI had a 1-handle on it back then, and it has a 7-handle on it today, but I can’t resist. I also can’t resist pointing out this Randy Quarles story from a Nick Timiraos article that is worth considering: link.

6. Further to flows/positioning: quarterly derivatives expiry will come to pass today — and with it, nearly $4tr of option open interest will go to the trading Gods. As ever, one should be on watch for the potential inflections that occasionally follow (for example, I’d argue the period following June SQ had elements of this). beyond that technical story, the other notable feature of the past month has been pockets of retail outflows; this is inconvenient as the corporate bid slows and the CTA bid all but disappears, if reverses. What I’m trying to say here: US households will be the arbiter of price action over the next two weeks (they were sellers for three consecutive weeks, turned buyer last week, and your guess is as good as mine on where they go from here).

7. In the fall of 2020, Jeff Currie and his team threw down the gauntlet and went bullish of commodities. While not without volatility and retracements along the path, it was a masterful call. To be clear, there’s no backing down for the structural thesis, and they are now forecasting that GSCI rallies — ahem — 43% next year. Note: “the main take away is we expect commodity markets to be shaped by underinvestment in 2023. From a fundamental perspective, the setup for most commodities next year is more bullish than it has been at any point since we first highlighted the super cycle in October 2020 … markets are simply unprepared for sequential growth in 2023.”

8. Something I’m struggling to work out: the ratio of US banks to S&P is on the dead lows … The ratio of European banks to SXXP is the photographic negative. As we head into the dog days of winter, I’d politely note here the official GS forecast of a recession in Europe, and no recession in the US. Color from Sarah Cha, sector specialist: “relative to the US, European deposit betas are not rising in the same way, the stocks are much cheaper, and banks haven’t really had much runway to occupy the balance sheets … from my seat, seems more a reflection on where European banks are coming from.” Coming out of a week that saw the ECB clearly out-hawk the FOMC, I’m inclined to think the local period of broad European outperformance is done.

9. Good people of Gen X, click here for some enjoyable Gen X content: link. my favorites: #4 (fix the TV by pounding on it the right way) … #16 (there were hours where no one knew where we were) … #22 (remembering phone numbers) … #27 (blowing inside Nintendo cartridges) … #30 (the smoking section in a restaurant).

10. I’m inclined to think the US consumer enters 2023 with a handful of significant tailwinds: sustained and significant wage growth, a y/y decline in US gasoline prices and a 9% raise for 70mm retired Americans come January. This chart from Jan Hatzius zeroes in on real disposable income growth … note the important trend shift in the red diamond from 2022 through 2023 (this all makes me a little resistant to completely abandon the inflation narrative and embrace the recession narrative):

11. As mentioned before, one should acknowledge their market biases. This will not come as a surprise, but I fully concede an inherent home-field bias towards the US. Therefore, this chart is cause for some introspection … The ratio of MSCI US over MSCI World ex-US (thanks to Scott Rubner for pointing out the inflection):

12. This surprised me a little bit … over the past three decades, “the January effect” has essentially pulled forward to November (link for pro subs): 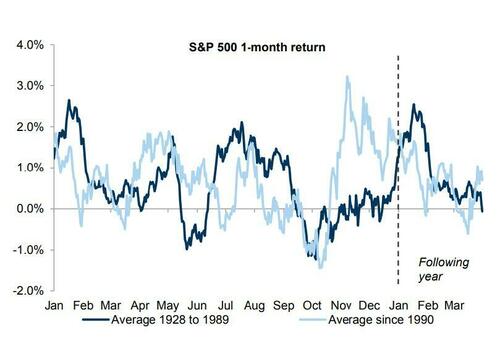 13. To conclude, three big picture charts on flow-of-funds and the broader industry. While the underlying trends here speak for themselves, my instinct is next year will see active strategies outperform: 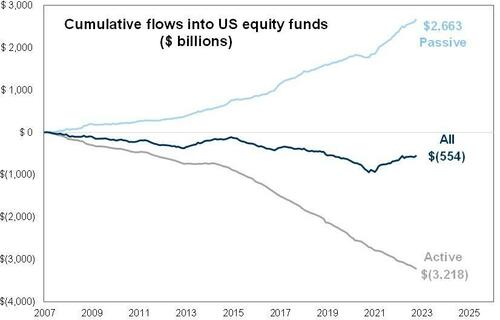 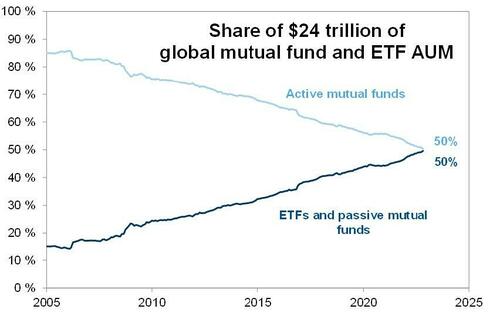 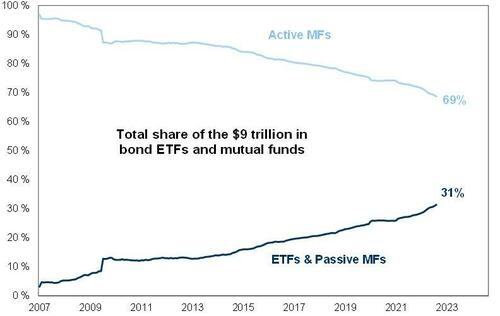 More in the full note from Tony P available to pro subs in the usual place.