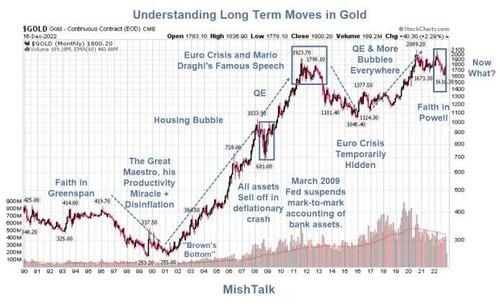 To understand what has happened and what is likely to happen, look at faith in the Fed and central banks in general…

A long-term chart suggests the real driver for gold is not inflation, not the dollar, not conspiracies, not China, and not oil, but rather faith in central banks.

It was time to go to the gold sidelines when it was clear the Fed was about to go on a major hiking cycle.

I made a mistake in not believing the Fed’s resolve. By the time I did, I felt there was not much more downside.

On December 14, I commented The Fed Projects Interest Rates Higher for Longer at Least Through 2023

A parade of Fed governors offering the same take.

Sure doesn't sound like Fed is taking a "wait-and-see" approach when it comes to interest rates … https://t.co/3cG0IBfZ1S

Gold doesn’t seem to believe that although it did react poorly on the announcement.

Gold also reacts to credit stress. It soared following Nixon shock, in the housing bubble, and with QE.

Meanwhile, the Fed seems hell bent on breaking something and I suspect they will. 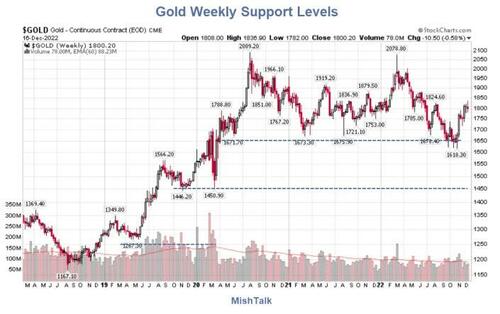 It’s possible gold is reacting to pending credit stress in the US, EU, China, or elsewhere. It’s possible that the $200 bounce is purely technical off strong support at $1650.

If you believe the Fed will produce some uneventful soft landing with steady disinflation, gold may not be where you want to be.

Meanwhile, talk on Twitterland is of a new gold repricing model, of oil priced in gold, of yuan backed by gold, of 9 year cycles, and central bank buying gold was bearish then and bullish now, with price targets of $9,000. All that discussion seems more than a bit silly to me.

Finally, the lead chart shows gold is in a major 10-year cup and handle setup, normally a bullish formation. And typically, the longer the consolidation, the bigger the move when it happens.

The other side of the coin, as addressed in my previous post, is that bullish formations and support levels often fail in bear markets while resistance and bearish formations fail in bull markets.

That’s both sides of the gold case in one post without all the hype.

What About the Dollar?

On a short term basis gold tends to move with the dollar, but sometimes, even for long periods of time, it doesn’t.

And while price correlation tends to be present, magnitude isn’t which is how you get $1,400 gold and $400 gold with the dollar index in the same place.